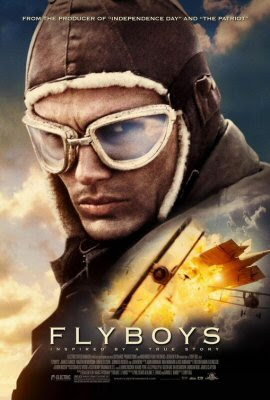 I’m usually out of steps with the critics and the public both, and FLYBOYS is a good example. It got mediocre reviews and did lousy at the box office, and I think it’s a wonderful movie.

It’s the story of the Lafayette Escadrille, Americans who became pilots for the French before the United States entered World War I. Although there’s a graphic at the start of the movie that says it’s based on a true story, the characters are all fictional and most of them are war movie stereotypes: the tough cowboy, the spoiled rich kid, the Bible-thumper, the black prizefighter, the guy with a dark secret, the confident guy who cracks up under pressure, the pilot who’s a grizzled veteran despite his relative youth . . . You get the idea. You’ve seen this stuff before, going all the way back to THE DAWN PATROL, but the makers of FLYBOYS do such a good job of it that I didn’t mind if it was hokey and predictable. I got caught up in it anyway and thoroughly enjoyed it. The big finish is telegraphed early on, but that didn’t stop the grin on my face when the pay-off scene finally arrived.

People who know a lot about World War I aviation will tell you that this movie is riddled with historical inaccuracies. That may well be true. Even though I’ve written a little about the subject (the novel UNDER OUTLAW FLAGS and the novelette “Devil Wings Over France”), I’m far from an expert on the subject. And this is one of those relatively rare cases where I don’t care. John Wayne and Stuart Whitman shouldn’t be carrying Winchesters and Peacemakers while Texas is still a republic, either, but that doesn’t make me love THE COMANCHEROS any less. Just think of FLYBOYS as a film version of a George Bruce pulp novel from WINGS or DARE-DEVIL ACES (there’s even an evil German flying ace called the Black Falcon, another pulpish touch), and you’ll have a great time with it. The subtle tributes to Charles M. Schulz and Snoopy don’t hurt anything, either.
Posted by James Reasoner at 12:42 PM

Synchronicity! Someone put this on at work today. I watched it as far as the scene where the pilot tracks down the girl he met at the bordello (she was just delivering supplies) and walked out. Sorry, but all those cliches, the whole cliches, and nothing but the cliches drove me away. I can see why it flopped, although it's probably no worse than some movies that were just as hackneyed but were boffo box office.

I agree, there's not much in this movie that's not a cliche, but I guess I was just really in the right mood for it. What can I say? I liked PEARL HARBOR, too.

I seem to like cliche stories, so I might find this one interesting. I usually try to hide my fondness for cliches, because they are so frowned upon. There, I've been outed!