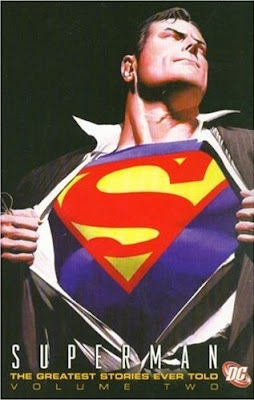 When I was reading comics as a kid, I never was as big a fan of Superman as I was of some of the other DC characters, like Batman, Green Lantern, and the Flash. But over the years I’ve come to appreciate the character more, so I really enjoy a volume like this that reprints a variety of Superman stories from the eight decades (!) he’s been around.
This collection is book-ended by a pair of stories featuring Mr. Mxyztplk, the mischief-making imp from another dimension, ranging from his introduction in a 1944 story written by Superman co-creator Jerry Siegel to a story published in 2005 and written by well-known mystery novelist Greg Rucka. In between are a couple of returns to Krypton, tussles with famous Superman villains such as Lex Luthor and Brainiac, Lois Lane and Jimmy Olsen getting into the usual jams, an attempt from the Seventies to modernize the character a little, and a tale from the stretch during the Nineties when Superman was dead, killed by the villain Doomsday. (He got better.) In addition to Siegel and Rucka, writers who contributed stories include science-fiction authors Edmond Hamilton and Otto Binder, and a couple of my favorite comics writers, Denny O’Neil and Elliot S. Maggin. Artists include Wayne Boring, who was the regular artist on Superman stories when I first started reading them in the late Fifties, and Curt Swan, the classic Superman artist who had the longest run on the character. All of this is great fun, and if you’re a Superman fan, this collection is highly recommended.

Posted by James Reasoner at 1:26 PM

Hey! You spoiled the ending!

I was always a sucker for those covers that showed Lois unmasking Clark Kent, or about to, making me read the comic to see how it really turned out. But I have to admit that my comic buying was sporadic until I became a collector in 1968.

Superman, the greatest icon of super hero comics, despite of Batman fans (as me) think. This collection is a must-buy for any fan of this hero. Buy Viagra Viagra