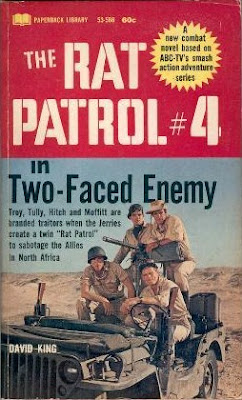 Randy Johnson mentions the Rat Patrol novels in his comment on the previous post. There were five of these published by Paperback Library in the Sixties, when the show was still on the air. The first one was by veteran pulp author and paperbacker Norman Daniels, the other four by David King. I don't know anything about King except that he wrote a Western or two under his own name and also wrote at least one Slocum novel as "Jake Logan". I read all the paperbacks when they were new (bought 'em right off the spinner rack -- boy, I miss spinner racks sometimes!) and liked all of them. I've thought about rereading them to see how they hold up, but I have no idea where my copies are and haven't worked up the enthusiasm to search for them. There was also a Whitman juvenile novel based on the series by I.G. (Ivy) Edmonds that I wasn't aware of until I looked up the books on ABE. Edmonds is another author that's mostly a mystery to me. I know she wrote some stuff for the Girl From U.N.C.L.E. digest magazine and a few paperbacks, but that's it.
Posted by James Reasoner at 1:45 PM

My goodness...RAT PATROL novels. Well, at least it was easy to improve on the source. No offense I hope, but that is perhaps my least-favored series from the 1960s, except perhaps for THE UGLIEST GIRL IN TOWN, among those I've seen...and that includes all those dismal hillfolk "comedies." (I spring from Appalachian families...)

Och...sorry...that you were reading RAT PATROL novels back when probably should've been a tipoff. Boorishness unintended, fwiw. (And you folks do look very happy in the photo...as well you might!)

No problem, Todd. I was probably just at the perfect age for the show, when racing around the desert in jeeps and shooting Nazis seemed like the coolest thing in the world. Of course, that still seems pretty cool to me, but I've stopped waiting to actually grow up "one of these days". Or as I've said to Livia many times, "Just how much maturity do you expect from a guy who earns his living making up stories about cowboys?"

I got to drive around Nam in a jeep for about six months and it was a hoot. But those things tip over pretty easily and I suspect they had to modify the ones on the show to keep them from going chassis up on the stars.

That's a great line about maturity, James. I'd love to steal it to use on my wife, but it doesn't fit. Could you come up with one for a poor, old, retired bookseller with a heart condition?

Ivy Gordon Edmonds was (still is?) a man. All I know is that he was born in 1917. You may remember this, but he wrote some PI novels about Greg Graves, also known as Big Eye, that were published only in Finland. I think I sent you some copies some years back. It seems also that Edmonds wrote some non-fiction for juvenile markets. He was a client of the Scott Meredith agency, so they might know more.

David King wrote the novelization of THERE WAS A CROOKED MAN. That's all I know about him. Wait, there's more: his real name was Howard Pehrson and he lived 1914-1994.

I just assumed Ivy Edmonds was a woman, since I've never encountered a man with that name. (Unlike Shirley Povich and Connie Sellers, also both male.) I looked him up on ABE and saw all those juvenile non-fiction books, too. Looks like that was the bulk of his work.

Yes, you sent me one of the Big Eye books. I looked at it yesterday. I believe the title is VILLIKISSA, or something like that. The copyright page also gives the title BIG EYE AND THE NAUGHTY NUDES.

Howard Pehrson is credited with writing two of the Slocum novels: the first one, RIDE, SLOCUM, RIDE, and the sixth one, SLOCUM'S GOLD. I believe at least one of these had a front-cover blurb from David R. King, so it doesn't surprise me that they're the same person. The second Slocum, HANGING JUSTICE, is by Jack Bickham and has a blurb from Bickham under his real name. I think those are the only times that happened, but I'd have to check the books to be sure. I'm relatively certain that the ones by Martin Cruz Smith didn't have blurbs from him on the covers.

I also enjoyed The Rat patrol books, and recently purchased season one on DVD, which I'm watching slowly. Season Two will be in my clutches soon.

Did you know that those books are expensive to buy now?

I believe that THE BIG EYE AND THE NAUGHTY NUDES is the title of the original manuscript.

FWIW, I looked it up. There seem to be no translations of his Big Eye books in German.

I think that this was a series that could not have appeared in this age due to some recent facts and traits that have changed society perspective. Buy Viagra Viagra