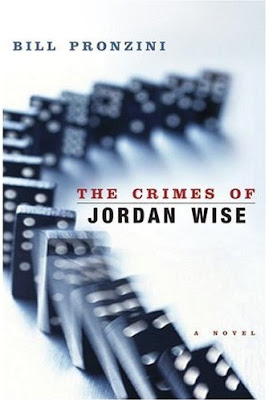 I’ve been a fan of Bill Pronzini’s work ever since I read his Man From U.N.C.L.E. novella “The Pillars of Salt Affair” in the MFU digest magazine sometime in the late Sixties. Of course, I didn’t know at the time that Pronzini had written that story. It was published under the house-name Robert Hart Davis, a tribute by publisher Leo Margulies to Bob Davis, an early pulp editor with whom Margulies had worked. Anyway, I was a huge U.N.C.L.E. fan and really enjoyed “The Pillars of Salt Affair”; I remember the ending of it to this day. It was a few years, though, before I discovered that Pronzini wrote it.

By that time I was also reading and enjoying his Nameless Detective series, one of the great private eye series of all time. Over the years I’ve fallen behind on reading the Nameless books, but I’ll catch up on them sooner or later. In the meantime, I’ve just read this stand-alone suspense novel by Pronzini, and THE CRIMES OF JORDAN WISE lives up to the high standard of his other work.

In classic noir style, accountant Jordan Wise meets beautiful-but-only-as-good-as-she-has-to-be Annalise Bonner (even Annalise’s name sounds like something out of a Gold Medal novel), and before you know it Jordan has embarked on a daring plan to steal a lot of money in order to win her over. That he succeeds is almost a given, but you also know that the idyllic life Jordan and Annalise make for themselves in the Virgin Islands isn’t going to last. Things Will Go Wrong. And they certainly do.

What makes THE CRIMES OF JORDAN WISE such a fine novel isn’t the plot, which won’t contain many surprises for regular readers of this sort of book, but rather Pronzini’s writing, which is some of the smoothest you’re liable to encounter. Like Lawrence Block, there’s nothing fancy about Pronzini’s words, no verbal pyrotechnics, just good old-fashioned storytelling that draws the reader farther and farther into the story with well-constructed sentences, concise characterization, and occasional bursts of action. THE CRIMES OF JORDAN WISE gets a high recommendation from me.
Posted by James Reasoner at 9:43 AM

I couldn't agree more. THE CRIMES OF JORDAN WISE is one of the smoothest and enjoyably novels I've read in the last few years.

I don't think Bill's capable of writing a bad book. Thanks for the heads up on this one. I'll have to get it.