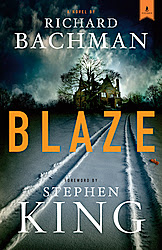 BLAZE is a trunk novel. Stephen King is right up front about that in his introduction. He’s revised it some for publication, but my impression is that it’s basically the same book that he wrote in the early Seventies, right before he wrote CARRIE, during the same period he was writing short stories for the men’s magazine CAVALIER. (I should point out that a few years later I also sold a short story to CAVALIER, along with numerous stories to its sister publications DUDE, GENT, and NUGGET. My career, however, didn’t follow the same path as King’s in any other respects.)

I tend to like trunk novels. I’ve read quite a few of them, ones that finally achieved publication and ones that never did. There can be a lot of reasons a book doesn’t sell besides its quality. One of the best Westerns I’ve read in recent years was a book that never sold, or at least hasn’t yet, as far as I know. So it’s no surprise that I liked BLAZE quite a bit. It’s part crime novel, part social tragedy, as the title character, the hulking Clayton Blaisdell Jr., tries to carry out a kidnapping that a con man friend of his planned before being killed. Blaze, as he’s called, was brain-damaged as a child when his abusive father threw him down some stairs, and the story bounces back and forth between the kidnapping story and the story of Blaze’s life as a child and young man in a series of orphanages and reformatories.

I’m not the biggest Stephen King fan in the world. I’ve read probably half of his books, and I’ve enjoyed most of what I’ve read. I really liked BLAZE, though. Like most of his early books, it’s very short and tightly written compared to the big, sprawling novels King has produced for most of his career. The story races along, and to give King his due, when he’s really on his game, there aren’t very many authors who can have the reader flipping the pages quite so fast. I have no idea what sort of critical reception BLAZE has gotten, but I liked it and don’t hesitate to highly recommend it.
Rounding out the book is a good short story entitled “Memory”, which King has expanded into a novel called DUMA KEY that’s scheduled to be published next year.
Posted by James Reasoner at 1:24 PM

I just finished Blaze as well and liked to quite a lot too. Agree with you that King is at his best in shorter novels and I would add that I think he is exceptional when writing about young people. Especially damaged young people. Not necessarily brain-damaged as with Blaze, but with youngsters who are just a bit off for one reason or another. Like Blaze's friend, John, at HH.

I haven't seen any critical comment on it anywhere, but I'm pretty out of it most of the time. But if the two of us liked it, what else needs to be said?

Yep, that's enough for me.

Stephen King rocks! However, I ignored the existence of this book. According to your review, it seems to be other of his great works. Buy Viagra Viagra