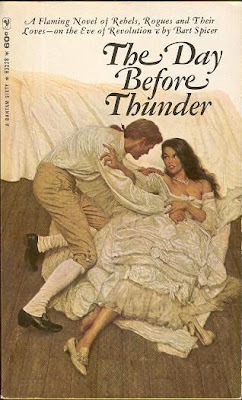 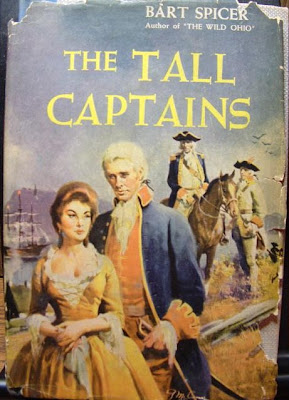 Juri Nummelin points out in his comment on my post about the Saddlebums blog that Brian Garfield, in his interview there, includes Bart Spicer in a short list of Western writers he admires. Juri didn't know that Spicer, best known for his series of novels about private eye Carney Wilde, had written any Westerns, and I didn't, either. I'm still not sure he did, but as the covers above indicate, Spicer certainly wrote some historical novels. Both of these appear to be Revolutionary War stories, and he wrote at least one other novel with a Revolutionary War background, BROTHER TO THE ENEMY, about Benedict Arnold. By the way, the cover for THE DAY BEFORE THUNDER is by James Bama. Never saw any women like that on those Doc Savage covers Bama is justly famous for.
Posted by James Reasoner at 10:27 AM

My first fanzine (1969) had a Bama interview, but at the time we were not aware of his western art. Too bad, it would have been nice to ask him a few questions about it.

Bart Spicer also wrote under the pseudonym Jay Barbette. I have all of Spicer and Barbette's books somewhere and I seemed to recall at least one western in the bunch. Spicer was a very versatile writer. He also wrote political thrillers.

Thanks for the information, Lee. I have at least one of those Jay Barbette books but had no idea that Barbette was really Bart Spicer.

According to Hubin, Jay Barbette was Bart Spicer and his wife (whose name escapes me at the mo').