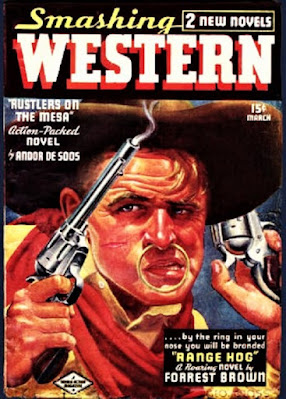 Thanks to David Lee Smith for this scan of one of the most unusual Western pulp covers I've seen. The artist is George Gross, and he came up with a striking way to illustrate Forrest Brown's novella "Range Hog". In the Fifties, Sixties, and Seventies, Brown wrote numerous Western novels under the name Ford Bowne. I've read one of them, MASTER OF THE LASH, and while it wasn't very good, it was eccentric enough to be interesting. Judging by this cover, "Range Hog" probably falls into the same category. I may have to read more of Brown's work. Also in this issue are stories by Andor de Soos (not a typical Western author name), Cliff Campbell (in this case, really Abner J. Sundell, originator of the Campbell pseudonym which later became a house-name), and an author I'm not familiar with, Russell Hays.
Posted by James Reasoner at 6:00 AM

Master of the Lash sounds like a Lash Larue movie.

I forget sometimes that Gross’ illustration career goes all the way back to the ‘30s. I first noticed his work in the ‘70s when he was doing covers for The Avenger reprints and the early Executioner books, so I always tend to associate him with that era. Much later, I found a small stack of JUNGLE STORIES at a used book store, thought I detected a similarity to Gross’ technique in the way the figures were rendered (his people often looked a bit shiny) and then had one of those ‘Aha!’ moments when I spotted his distinctive signature near the bottom. It was my first inkling that he’d had a much lengthier career than I’d suspected.

Along the way, he did tons of Pulp covers in all genres (he was THE Ki-gor artist), sleaze/mystery digests, Men’s Adventure mags, Action/Adventure and Western paperbacks (including some iconic covers for the Edge series) and dozens of Nick Carter books in the late 80s. He doesn’t get as much attention as some other Pulp/paperback illustrators, but dang, he sure did a lot of great work.

It almost could have been, with a lawman hero and an old codger sidekick. Didn't Lash usually play a U.S. Marshal?

Yes, he usually did.

I googled Andor de Soos, and see that he is listed as a songwriter and a poet. I'm guessing that the pulps helped pay the bills though.

The cover graphic had me doing a double take , which I suspect was the point of it ! :-)

I take the following excerpt from "The Russell Hays Letters".
Among other great friendships born from these years, was the three-decade bond between L. Ron Hubbard and fellow author Russell Hays. Hays was a fascinating figure. In addition to the penning of highly authentic westerns, he held several key patents for helicopter rotary systems, coaxed fine skunk cabbage from Kansas dust and occasionally drilled for oil.
Tiziano Agnelli