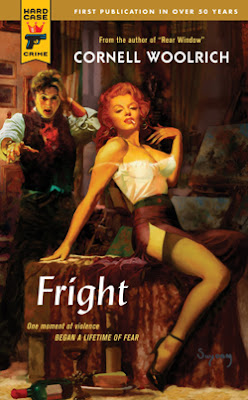 (This post originally appeared in somewhat different form on September 22, 2007.)

I’ve been a Cornell Woolrich fan ever since I encountered reprints of some of his pulp stories in EQMM and THE SAINT MYSTERY MAGAZINE during the Sixties. I’ve read many of his short stories and novelettes and enjoyed them all, but only a couple of his novels, the justly-famous THE BRIDE WORE BLACK and DEADLINE AT DAWN, which I also enjoyed. Until now. I’ve just read the recent Hard Case Crime reprint of Woolrich’s novel FRIGHT, originally published in 1950 under the pseudonym George Hopley. 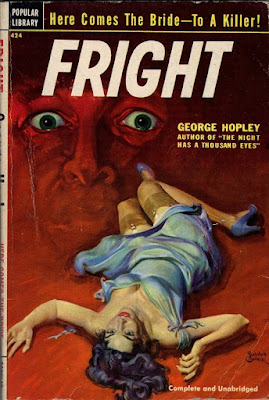 FRIGHT is one of Woolrich’s historical suspense novels, set in 1915 and 1916, and he does a fine job of recreating that era without going overboard on the historical details. The very strait-laced attitudes of the time period play a part in the plot, too, helping to drive the protagonist to do the things he does. It’s difficult to go into detail about that plot without giving away too much, but let’s just say there’s blackmail, murder, paranoia, more murder, doomed love, more murder, and tragedy galore. Pretty much the essence of noir, in other words, and all told in smooth, if slightly old-fashioned prose that keeps the reader turning the pages. Yes, the coincidences and lapses in logic that Woolrich is notorious for can be found in FRIGHT, but as usual the writing and the raw emotional torment he inflicts on his characters more than make up for any flaws. There are passages in this book that I found genuinely disturbing, and I’m usually not easily disturbed by fiction. FRIGHT is one of the bleakest books I’ve read in a long time.

It’s also one of the best, and I have a feeling that it just might start me on a Woolrich binge. I don’t know if my heart can take it, though.

(Update: There was no Woolrich binge. In the almost fourteen years since this post first appeared, I've read one of Woolrich's novels, THE BLACK ANGEL, and a few of his short stories. That's it. I still really like his work and plan to read more of it, but you know how it is. Road to hell, good intentions, etc., etc. . . .)

It was a binge, but only a short one.

There's no time like the present to double it!

You should give PHANTOM LADY a try.

A guy has a row with his wife and goes down to the corner bar to cool off. While there he gets into a conversation with a woman he's never seen before, telling her he has dinner reservations and tickets to a show and why he won't get to use them. They end up striking a bargain. She'll accompany him to dinner and the show. There will be no strings or commitments, not even an exchange of names. The man agrees to this, so they go to dinner, see the show, then some dancing, and part ways.

The man returns to his apartment to find his wife murdered in his absence. He's the only suspect. He claims the unknown woman as his alibi. Everywhere he went, the bar, the dinner, the theater, etc., the people there swear he was alone. She's his only hope. He has no idea who she is or how to find her.

The title of the first chapter is "The Hundred and Fiftieth Day Before the Execution" and they count down from there.

Woolrich came up with some of the nastiest plot twists in fiction. Great writer.