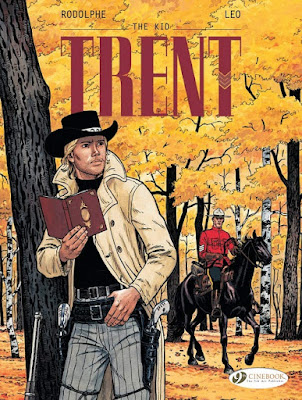 I enjoyed the first Trent graphic novel, THE DEAD MAN, and I'm still a fan of Mountie stories, so I recently read the second volume in the series, THE KID.

This one finds Sergeant Trent of the RCMP and his faithful companion Dog on the trail of The Kid, an American outlaw who has crossed the border into Canada after a botched bank robbery that cost the outlaw the life of his girlfriend, who had been traveling and robbing banks with him. The Kid has killed numerous men during this spree, and Trent expects him to be a brutal, callous, hardened criminal.

Well, as it turns out, he kind of is, but he's also an actual kid, still a teenager, and something of a sensitive soul who reads Rimbaud's poetry and writes passages from it on the walls of buildings as he flees across Canada. There's never much doubt in the reader's mind that Trent will catch up to him, but everything doesn't play out as might be expected.

I liked this one even more than THE DEAD MAN. THE KID has a lot more action, along with a good script by Rodolphe and excellent art by Leo. Trent is a fine protagonist with layers that are only slowly being uncovered. I plan to read the rest of this series and probably will do so in fairly short order.