The Girl With No Place to Hide - Nick Quarry (Marvin Albert) 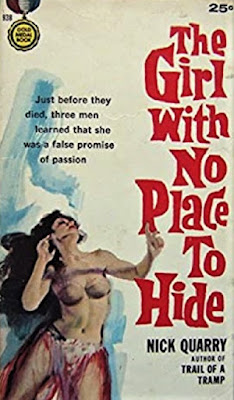 Marvin Albert was both prolific and talented and turned out a steady stream of very good to excellent mystery, adventure, and Western novels for more than three decades. In the late Fifties and early Sixties, he wrote six novels featuring New York City private eye Jake Barrow, using the pseudonym Nick Quarry. I've known about these books for many years but have never gotten around to reading any of them until now. The great Black Gat Books line is reprinting THE GIRL WITH NO PLACE TO HIDE, widely regarded as one of the best Jake Barrow books.

It gets off to a promising start with Jake, our narrator/protagonist, watched a very provocative dance act in a nightclub. He's in the company of a friend of his, a prizefight manager whose boxer has an important bout coming up. A short time later, Jake runs into a beautiful dame who has a thug trying to kill her. Jake rescues the woman, of course, and lets her hide out in his apartment while he tries to get the story of her trouble out of her. But before he can do so, he's decoyed out of the place on what sounds like an important case, and when he gets back after finding he's been tricked, the gal is gone. Jake, you really should have seen that coming. 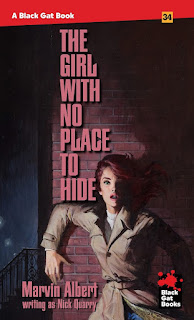 In classic private eye fashion, of course, Jake's not going to the woman's disappearance go uninvestigated, and so, over the course of the next few days and 180 or so pages, Albert really pours on the complications. You've got a murder involving a garment district tycoon, the death of a photographer, some brutal, corrupt cops, several beautiful women, and a bunch of gangsters and thugs and gamblers. Jake gets beaten up, tortured, and knocked out numerous times. But he always bounces back from whatever punishment the bad guys dish out and keeps digging for the truth.

There's nothing in this book you haven't read before in plenty of other Fifties private eye novels. In fact, at times it almost seems like Albert has overloaded it with plot elements. But he juggles them all very skillfully and, in the end, weaves everything together in a pretty clever solution. Jake Barrow is a good protagonist, smart and reasonably tough. He reminded me of a somewhat less intense Mike Hammer, and in fact, this could have been a Mickey Spillane yarn. There are some brutal but very effective action scenes along the way.

THE GIRL WITH NO PLACE TO HIDE is a front porch book, and as you know, that's a pretty high rating for me. If I'd read it back in the Sixties, sitting on my parents' front porch, I really would've been flipping the pages to find out who was going to try to kill Jake next and how far he was going to get with the luscious dames he keeps running into. It was just great fun, and if you're a fan of private eye novels, it's well worth reading. The Black Gat edition is available for pre-order.

Thanks for this review as I've always enjoyed Marvin Albert novels--western, crime, or high adventure. His "Stone Angel" novels featuring Pete Sawyer are my favorites but I will happily search out this Jake Barrow series.

I have several of the Jake Barrow novels in the original Gold Medal editions, but I don't think I've ever seen a copy of this one. The cover certainly doesn't look familiar. I'm glad Black Gat is reprinting it and sent me an ARC. I'm going to check my shelves and see which of the others I have. I remember that Bill Crider was a big fan of Marvin Albert's work, including his movie novelizations.

I like Albert a lot. I think his Clayburn westerns might be my favorite series, but Jake Barrow would be a close second, as would Stone Angel.

The one Clayburn novel I've read was really good. Here's my review:

Despite what I say in the review about reading the others in the series, I've never gotten around to it. Yet another case of too many books and not enough time.

The Clayburn's stories are all very well written and compelling. The Man In Black was the basis for "Rough Night in Jericho" a 1967 movie directed by Arnold Laven, starring George Peppard (as Clayburn, but here the name's Dolan), Dean Martin, Jean Simmons and John McIntire. Albert co.wrote the screenplaywith Sydney Bohem.
Tiziano Agnelli

Big fan of Marvin H. Albert. His 4 adventure novels he wrote under the name Ian MacAlister are top shelf stuff.

Tiziano,
There's a novelization of the ROUGH NIGHT IN JERICHO version, too, by Ben Haas writing as Richard Meade. That's always struck me as a little odd, a novelization of a movie based on another novel. I'm a little surprised they didn't just do a movie tie-in of Albert's novel.

August,
I've got to go through my shelves and see which, if any, of those Ian MacAlister novels I have. I keep hearing excellent things about them.

It's great to see this review and the positive comments about Marvin Albert.

I read the fifth Jake Barrow, Till It Hurts, a few weeks back, leaving me with only the final volume, Some Die Hard, unread. Every novel has been good fun and I'll be sad to be through with them.

Albert, working under any name, is one of the most dependable authors I know.
Thumbs up to August for calling out the books Marvin wrote as Ian MacAlister. I'd like to make a special note of Driscoll's Diamonds, which Ed Gorman once described (with great accuracy) as "a kickass adventure novel".