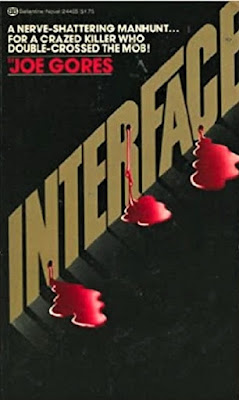 I really enjoyed Joe Gores’ novels HAMMETT, featuring the famous author as the protagonist, and SPADE AND ARCHER, his prequel to THE MALTESE FALCON. I also recall liking his early novels about private detective Dan Kearney and the agency Kearney runs. So I expected to like INTERFACE. For one thing, it was highly recommended to me by both Bill Crider and Ed Gorman. Somehow, though, I never got around to reading it in the past four decades I’ve known about it. Until now.

INTERFACE starts with a drug deal gone bad. A mysterious man named Docker kills one of the men involved in the deal and takes off with a briefcase filled with a quarter of a million dollars worth of heroin and $175,000 in cash. For the next twenty-four hours, he leads various people on a not-so-merry chase through San Francisco and its environs. Among the people involved in this pursuit are Neal Fargo, a private detective who’s no better than he has to be; a couple of crooked businessmen; a wealthy industrialist whose daughter has disappeared; a sadistic, knife-wielding chauffeur; a drug-addicted prostitute; assorted cops; and a network of lowlifes who work for the various criminals. Gores keeps things moving so fast and throws in so many different angles that this is almost a book where it would pay to keep character lists and draw diagrams.

I didn’t go to that much trouble, of course, and maybe as a result I figured there was no way Gores could tie all this up into a plot that made sense. He not only did that, but he also threw in a late twist that I didn’t see coming at all, although when I look back at everything that happened in the book, I can see that it was set up fair and square. And it's really effective, raising the book, in my opinion, from one that’s very good to one that’s excellent.

The gimmick, if you can call it that, in INTERFACE is that we never get into any of the characters’ thoughts. Gores gives us their dialogue and actions, and that’s it. Anything else, we have to interpolate ourselves. That really adds to the hardboiled tone and helps make the complicated plot work.

I don’t think INTERFACE is as good as HAMMETT and SPADE AND ARCHER, and I’m not quite sure that it lives up to its reputation as one of the best hardboiled crime novels ever written. But it is very much worth reading, and I’m glad I finally got around to doing that. There are a few other Gores stand-alones I’ve never read. I’m thinking I ought to.

Yes, even all these years later, I remember that late, great final twist. He got me too.

It's been mentioned as one of the few books, along with "Maltese Falcon" and "Glass Key", to be written entirely in 'third person objective" point of view.

Thanks for not wrecking the twist. It just so happens that I've got the book at the bottom of the TBR.

I'm shocked that in the more than 45 years this book has been out, I've never run across any spoilers for it. But it took me totally by surprise.

This is my favorite of the author’s books. Liked it more than Hammett or any of the stand-alones I’ve read.
The plot is ingeniously handled. I knew I was in for something shifty and it got me all the same.

James, did you ever see the movie adaptation of Hammett? It was pretty disparaged for a while, but I enjoyed the hell out of it
Plus, it has a deliciously atmospheric score….

I read this one so long ago, I can't remember the twist, just that there was one. I should probably give it a reread.

John,
I did see the movie version of HAMMETT and recall liking it, but it's been so long ago that's all I remember. Might be time to watch it again.