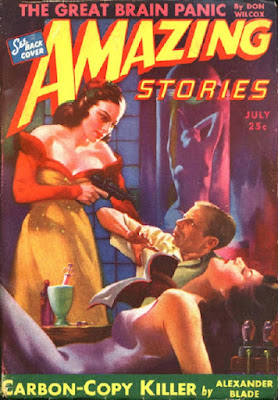 Okay, I may be nuts, but the guy in this cover by Harold W. Macauley looks to me an awful lot like Ray Palmer, the editor of AMAZING STORIES. It wouldn't surprise me if Macauley used Palmer as his inspiration for this one. Many of the usual Ziff-Davis writers are on hand in this issue, including Alexander Blade (in this case, Howard Browne), P.F. Costello (in this case, William P. McGivern), Don Wilcox, Robert Moore Williams, and Festus Pragnell. I love this era of science-fiction, although admittedly AMAZING STORIES is on a slightly lower rung for me than PLANET STORIES, THRILLING WONDER STORIES, and STARTLING STORIES.
UPDATE: It is indeed Palmer on the cover. Here's the editorial from that issue, in which he talks about it. Many thanks to Dwight Decker for providing this. You can click on the image to read it. 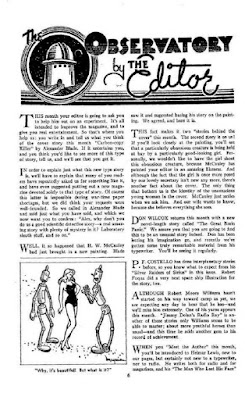 That the guy on the cover was the spitting image of Ray Palmer was my second thought on seeing this cover. My first thought involved the woman in the purple dress in the foreground and isn't worth repeating.

Yes, it's quite a good cover in other respects, too.

Yes, it's Palmer on the cover. He talks about it in the editorial section for that issue.

Thanks! It's always good to know that I'm not imagining things.

I don't have a photo of Palmer's wife, but understand she was conventionally pretty, so the in-joke might well extend at least that far, as well--that is, the gun-wielder being modeled on Ms. Palmer.

Someone on Facebook posted Palmer's editorial from that issue in which he talks about Macauley using him as one of the characters on the cover. Of course, I can't find the post now, but I believe Palmer mentioned that one of the girls was a secretary at Ziff-Davis. No mention of his wife, but it's certainly possible.

And of course, the reason I couldn't find it on Facebook was because it was on MeWe. Thanks to Dwight Decker for the image.

Probably Not a Ray-gun wedding.