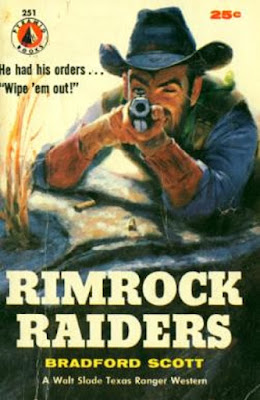 As I’ve mentioned before, the Walt Slade novels by A. Leslie Scott (writing as Bradford Scott) are comfort reading for me. I know exactly what I’ll get because the plots are almost always the same: Texas Ranger Walt Slade, who sometimes pretends to be an outlaw known as El Halcon, rides into an area bent on breaking up an outlaw gang and discovering the identity of the hidden mastermind behind all the hell-raising that’s caused the locals to ask the Rangers for help. For approximately three-fourths of the book, Slade will break up various plots by the gang and kill off quite a few of the owlhoots, while picking up a few clues as to who the big boss is and what’s behind it all. He may even be captured and escape a time or two. Then, in the final fourth of the novel, things become clearer, Slade closes in on the main villain and his henchmen, reveals the true motive behind the scheme, and wraps things up in a huge blaze of gunfire or, more rarely, a hand-to-hand battle to the death.

RIMROCK RAIDERS, originally published by Pyramid Books in 1957, sticks pretty closely to this formula. Slade is in the Big Bend this time, operating in and around a silver mining boomtown. The mines and the surrounding ranches in the Espantosa Hills are being plagued by a gang known as the Rimrock Raiders. (By the way, according to Scott, there are numerous different ranges of Espantosa Hills and Espantosa Mountains in Texas. It means “Haunted”, and he really loved the name.) Slade befriends a saloonkeeper who has gotten on the wrong side of the outlaws. He lets the townspeople believe he’s an outlaw, too, but the sheriff is an old acquaintance and knows that Slade is really a Ranger. He breaks up bushwhackings, trails rustlers, thwarts a payroll robbery, and explores the countryside, looking for the reason the Rimrock Raiders are really up to no good. When the identity of the evil mastermind is revealed, it won’t come as a surprise to anybody who’s ever read one of these books.

So, if they’re all the same (and they pretty much are, as I realized even when I was buying them new and reading them more than fifty years ago when I was in high school), why read them? I’m glad you asked. Because Scott writes great, breakneck, over-the-top action scenes. Because he writes descriptive passages in sometimes flowery but very effective prose. Because he usually comes up with some oddball twist regarding the bad guys’ method of operation and/or the motivation behind their villainy. All of these things are true in RIMROCK RAIDERS, although the description is a little more toned-down than in some of Scott’s books. The discovery he makes in the Espantosa Hills is a good one, though, and a little on the macabre side. I don’t know if it’s realistically possible, but I don’t care, either.

I never read Walt Slade novels back to back, or even too close together. But taken sparingly, I still enjoy them very much. There’s an ebook version of RIMROCK RAIDERS available, and if you’ve never read any of the series and would like to try one, it’s a pretty good example.