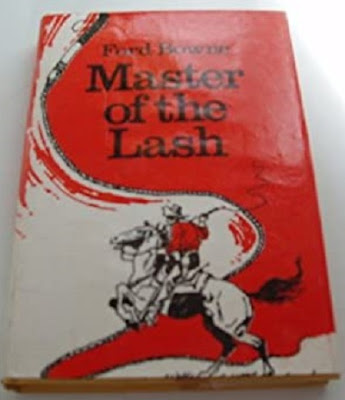 I was vaguely familiar with the name of Western writer Ford Bowne, probably because late in his career, he published at least one novel with Manor Books, the publisher of my first novel. I’d never read anything by him, but when I came across a 1974 novel entitled MASTER OF THE LASH, I was intrigued enough to buy it and read it. The results were .  . . mixed.

First of all, MASTER OF THE LASH sounds more like the title of a plantation novel, but this is definitely a Western. The protagonists are a young U.S. marshal with the unlikely name of Sudbury Pinkham and his old geezer sidekick Joe Enright. They aren’t really on law business, though. They’re answering a summons for help from an old flame of Pinkham’s, a Chinese girl who was bought from her impoverished parents by evil cattle baron Fritz Hein, a German immigrant with a fondness for whips (hence the title of the book). Hein has in turn sold the girl to another, slightly less evil cattle baron, but now she’s disappeared after smuggling out a note to Pinkham, who worked on Hein’s ranch as a young man. Then there’s the shadowy hombre who calls himself Will of the Willows, whose motives for getting involved are a mystery. Follow all that? The plot actually gets a lot more complicated, full of tragedy and melodrama, an old murder, a will written in German, a deadly booby trap, and a bloody, high country showdown between two men wielding whips.

This is a seriously weird book. It was published by Lenox Hill Press, a small publisher whose books were marketed almost exclusively to libraries. It was similar to Arcadia Press and Avalon Books, the best-known of such small library publishers. As such, the language is remarkably clean; I don’t think there’s a single damn or hell in the book. But there’s plenty of gory violence, as well as a scene where Hein strips Lotus, the Chinese girl, naked and puts her over his knee to spank her. It’s implied that he whipped her naked in the past, too. Clearly, the publisher didn’t care about any of that.

On the plus side, there are a number of lurid, over-the-top scenes, which are always okay with me. The plot has a lot of layers to be peeled away, and the characters, while mostly unsympathetic, are interesting. Hein in a thoroughly despicable villain, but he holds some surprises, too. MASTER OF THE LASH has the makings of a pretty good book.

What keeps it from following through on that is that Ford Bowne just wasn’t a very good writer. Some scenes are written in such a clumsy manner that I had to read them more than once just to figure out what was going in. The dialogue is oddly formal and stilted much of the time. There are some excellent moments here and there—the final showdown with whips is great, for example—but they’re too few and far between.

Ford Bowne was actually a writer named Forrest R. Brown, who published a dozen or so stories in the Western pulps under his own name and the Bowne pseudonym. He wrote an equal number of Western novels for Lenox Hill Press, Arcadia Press, and Manor Books, along with a few volumes of historical non-fiction. MASTER OF THE LASH is from fairly late in his career. Maybe his earlier books are better. I found enough oddball stuff to like in this one that I might try another book by him at some point, but I won’t be in any hurry to do so. If you’re a casual Western reader, there are a lot better books out there to read than MASTER OF THE LASH, but it's not totally without interest. Just consider yourself warned.

(That's a picture I found on-line. My copy doesn't have a dust jacket.)
Posted by James Reasoner at 4:30 AM

The publisher sounds more interesting than the story! Sometimes that be justify reading a book for me, if it sends me down a rabbit hole of research that I wouldn't have otherwise thought to do.

I didn't realize it started out as Arcadia House, another publisher I mentioned. I guess that's why I thought they were similar!