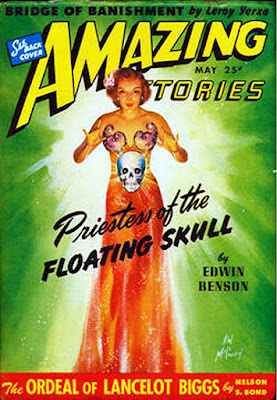 I like the cover by Harold McCauley on this issue of AMAZING STORIES. It's hard to go wrong with a floating skull and a sexy redhead, even though she's probably evil. I mean, she's the "Priestess of the Floating Skull", which sounds pretty sinister. The author of this featured story is Edwin Benson, which was a Ziff-Davis house-name, so there's no telling who actually wrote it. Perhaps Leroy Yerxa, who also has a story in this issue and was very prolific, or Robert Moore Williams, also on hand under his own name. Other authors in this issue are Nelson S. Bond (with a Lancelot Biggs story), Ross Rocklynne, and Festus Pragnell, a name that's always sounded like a pseudonym to me but evidently wasn't. None of these authors are particular favorites of mine, but I'm sure I would have enjoyed this issue anyway, had I plucked it off the newsstand in 1943.
Posted by James Reasoner at 8:10 AM

I love it when you post about magazines that are available online.

There are enough pulps posted on the Internet that I could read nothing else from now on and probably not get around to all of them. I hardly ever read anything like that on-line, though. Spend too much time staring at the screen in my work. For some reason, the Kindle is different and doesn't bother me. But yeah, I'm very glad they're out there for folks to read.

Festus Pragnell is an Englishman born 1905 and died 1965. Served on London Police force. Published a fair amount of fiction in the American Pulps. His better work is strongly in the tradition of H.G. Wells. (Extract from Science-fiction: The Gernsback Years : a Complete Coverage of the Genre ...).
Rock Rocklynne is the pseudonym of Ross L. Rocklin.
Best,
Tiziano Agnelli

I've read one Pragnell story ("War of Human Cats" as reprinted in the first issue of FANTASTIC I read, June 1971, sometime around the end of 1977...it wasn't very good, but it was amusing to be fully in the presence of mediocre pulp.

Ross Rocklynne wrote some very good stories indeed, and some were clearly just to pay the bills...I read my first stories from him in back issues of FANTASTIC, as well (both new and reprints from FANTASTIC ADVENTURES), after reading his good story in AGAIN, DANGEROUS VISIONS.