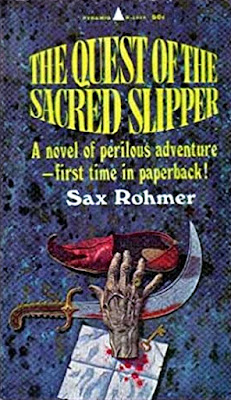 THE QUEST OF THE SACRED SLIPPER is another early novel by Sax Rohmer (Arthur Sarsfield Ward) that  was published originally as a series of eight short stories in the magazine SHORT STORIES (appropriate, eh?) from November 1913 through June 1914. The protagonist/narrator is a British journalist named Cavanaugh who, on a ship traveling back to England from the Middle East, befriends an archeologist and anthropologist who turns out to have stolen a sacred relic, a cloth slipper believed to have once been worn by Mohammed. Strange, sinister things happen, and when they get back to England, the archeologist is murdered and Cavanaugh comes into possession of the key to the place where the slipper is hidden. This makes him the target of the Hashishin, a fanatical cult of killers bent on recovering the slipper. There’s also a mysterious, beautiful girl with violet eyes somehow involved in the dangerous affair.

This novel has an episodic nature due to its origins as a magazine serial, as did the last Sax Rohmer novel I read, BROOD OF THE WITCH QUEEN. I think THE QUEST OF THE SACRED SLIPPER holds together a little better, though, and has enough drive to keep it moving steadily forward even though the seams between the installments show pretty plainly. The book starts out well and then becomes even better part of the way through with the introduction of another character, an American criminal mastermind known as the Stetson Man, who is also trying to get his hands on the slipper. Earl Dexter is a Westerner who wears a Stetson (hence the nickname), and he’s as out of place in England as the Hashishin are, putting poor Cavanaugh in the middle of two colorful enemies who are out to steal the slipper. 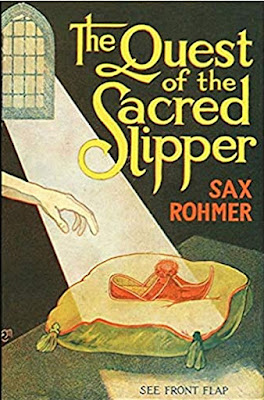 Rohmer keeps the action moving and throws in plenty of the usual bizarre murder methods and death traps that show up so often in his books, especially the Fu Manchu novels. I do have a couple of minor complaints. Cavanaugh, like many of Rohmer’s narrators, isn’t a very strong character (although he tries), and Inspector Bristol of Scotland Yard, who investigates the case, never rises to the level of Sir Denis Nayland Smith when it comes to being a formidable adversary for the bad guys. In fact, it’s one of those bad guys, Earl Dexter, who actually comes closest to being the protagonist of this novel, and he’s simply not on-screen enough to function well in that role. Also, the ending is a little abrupt and not as dramatic as it could have been.

All that said, THE QUEST OF THE SACRED SLIPPER is a very entertaining yarn, and Earl Dexter is an interesting enough character that I wish Rohmer had written more about him. I enjoyed this novel quite a bit and I’m sure I’ll be reading more by Rohmer in the relatively near future. By the way, THE QUEST OF THE SACRED SLIPPER is in the public domain and there are free e-book versions in numerous places on the Internet, plus some very reasonably priced and well-done reprint editions.

One thing I notice in these and other books of the era is that there is usually little action or even contact between protagonists and antagonists.

I went through a time where I tried very hard to like Rohmer. But other than a few Fu Manchu novels (Face and a few others), I just could not.

Me too, Spike.
Fu was cool as hell, all mysterious and menacing. He had class.

His opponents, in contrast, seemed like The Stuffed Shirt Squad.
Paragons of "clean British efficiency" indeed. Bloviating British Banality, was more like it.

I kept hoping they'd trip and fall into one of Fu's gardens of lethal fungi, but it never happened.

"Cavanaugh, like many of Rohmer’s narrators, isn’t a very strong character (although he tries), and Inspector Bristol of Scotland Yard, who investigates the case, never rises to the level of Sir Denis Nayland Smith when it comes to being a formidable adversary for the bad guys. In fact, it’s one of those bad guys, Earl Dexter, who actually comes closest to being the protagonist of this novel, and he’s simply not on-screen enough to function well in that role."

Sort of like Fletcher Pratt usually writing stronger female characters than male characters...when all of his novels had male protagonists.

I think it's fairly obvious that heroic/adventure fiction benefits when the antagonist is truly interesting. THAT is what Rohmer gave us. Fu Manchu (himself a more perfect descendant of Moriarty) inspired the Doctor Dooms and Doctor Nos who came later.

I agree with Mr. Hocking that Smith and Petrie are not the best protagonists. However, William Patrick Maynard, in HIS Fu pastiches, has somehow managed to stay very true to Rohmer while making Smith and Petrie more interesting/sympathetic. I'm not the biggest booster of pastiches in general, but I have to say that Maynard has taken a jewel in the rough and made it sparkle. He would disagree, but I stand by it.

Fu Manchu is the only Rohmer I’ve read, and just two of them, so though I have a bunch more, I’m not sure if or when I might get to them.

Great article. Couldn’t be write much better! Keep it up!