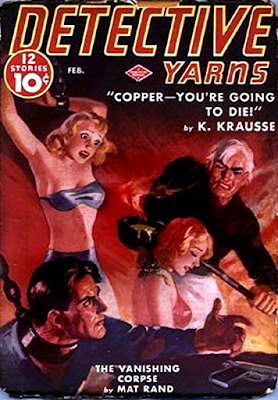 The Weird Menace boom of the mid-Thirties hadn't gone away completely by 1939, as the cover of this issue of DETECTIVE YARNS proves. Definitely some Weird Menace influence in this cover. I don't know the artist. The stories inside sound more like typical hardboiled detective pulp. The best-known authors are Fredric Brown, Carl Rathjen, and Armand Brigaud, backed up by lesser-known authors and house-names.
Posted by James Reasoner at 8:24 AM

DETECTIVE STORY MAGAZINE under Daisy Bacon was still running some straight-up, if slightly toned down, shudder by the likes of John Knox up till the end, as part of its mix...the most diverse of CF magazines of its era, perhaps.

I've read a few issues of DETECTIVE STORY MAGAZINE and despite having some good stories it always seemed a little too stodgy to me. My taste runs more toward the lurid these days.

The Brown Story is "There Are Bloodstains in the Alley," which was included in the Dennis McMillan volume "Three Corpse Parlay." I have a copy of the McMillan but haven't read yet. Brown is one of my favorites, but instead of racing through everything I'm spacing it out, one a year or so, so I can prolong having new material by him to read. I don't do that with all authors, but with him I just love knowing I have "new" books waiting for me.

I've wanted to grab those Haffners for a while, probably by the time I decide to they'll be out of print and cost me an arm and a leg. As my friend the bookseller once Michael Seidenberg told me, "You never regret the book you buy. You only the regret the book you don't buy." Was he trying to get a sale out of me? I actually don't think so, but maybe he was using reverse psychology on me. Either way, I miss Michael, fabulous bookseller and wonderful friend, RIP.

Bill Crider told me the exact same thing more than once! I've tried to live by those words. (Which is why the stacks of books make it hard to get around in my office.)

My house has been doing its level best to eat my books, though not as thoroughly as I fear your house did a decade or so back, James.

And, yes, the eclecticism could me that up to a third of a given issue of DETECTIVE STORY might not appeal to anyone at all who liked a certain kind of cf and not another. I sent along an issue from the mid '40s to Laurie Powers that she was perhaps even more keen than usual to see because of the equestrian theme of the cover story...the mildly hardboiled William Campbell Gault novelet was easily the best story in the issue for me, the Knox the worst though odd to see at that late date outside a shudder revivalist title such as WEB TERROR.