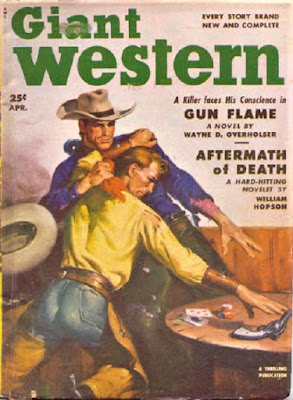 This cover is more proof, as if we needed it, that no card game ever ended peacefully in the Old West. Sam Cherry did most of the covers for GIANT WESTERN and this one is probably his work, too, but I don't know that for sure. There are some good authors inside this issue: Wayne D. Overholser, Philip Ketchum, and William Hopson all have stories, along with Russ Winterbotham and William Ratigan, who wrote a series for ADVENTURE about a character named Captain McCargo. I've never read any of those, but they sound good.
Posted by James Reasoner at 6:01 AM

Although I have some of Russ Winterbotham western stories in pulps, I primarily know him for his science fiction. He had several SF novels published in hardback by Avalon Books, which catered to libraries with the best known perhaps THE SPACE EGG originally in Amazing Stories. It was reprinted in PB by Monarch with a nifty Jack Schoenherr cover. The Monarch bio says he was from Kansas and had a career in newspapers and as a fiction editor for NEA. It also says of his novels three were westerns but I have never seen one.

Thanks, Richard. Winterbotham's name was vaguely familiar to me, but I didn't recall why. Now that you mention it, though, I remember the SF connection.

Thanks, Jerry. I've seen some Ace Double mysteries by J. Harvey Bond but had no idea that was Winterbotham.

Thanks, Tiziano. I'd never heard of Vic Flint or The Good Guys and had to look them up. Even though Winterbotham didn't have anything to do with it, Vic Flint sounds like it might be worth checking out:

I wrote earlier that I had never seen a western novel by Winterbotham and that is not true. Looking for another book in my basement,I found a hardback THE MAN FROM THE HIGH PLAINS (Arcadia House 1958)from a dealer in Yonkers NY IN 2009. I thought I read it but the jacket details don't jog my memory. It takes place in Abilene, TX and features a buffalo hunter named Smoky Hill with a horse named Shrapnel. These details sound good and I will give it a whirl.

I appreciate the jog about his Ace Double mysteries as by J. Harvey Bond. I forgot about that byline but have several of those novels.

That novel sounds pretty good. I love the horse named Shrapnel. I'll keep an eye out for it.