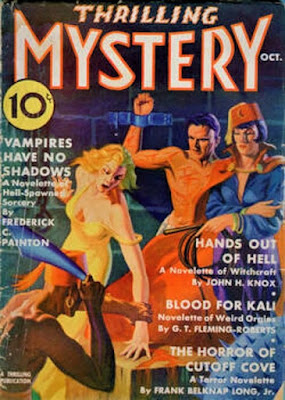 Well, here's a cover with a little bit of everything! THRILLING MYSTERY may not have been the best-known of the Weird Menace pulps, but it had some good covers and authors. Inside this issue are stories by top pulpsters John H. Knox, G.T. Fleming-Roberts, Frank Belknap Long, D.L. Champion (writing as Jack D'Arcy), Frederick C. Painton, and none other than Leslie Scott, best remembered for his Westerns, of course, writing under his pseudonym A. Leslie. A very entertaining issue, I'll bet.
Posted by James Reasoner at 5:57 AM

I just finished a handful of John Knox stories (some re-reads among them). Great weird menace writer. Incorporates southwest in most of his stories (he was a Abilene resident, I think). One story had a form of La Llorona legend, another had Phonecian ghost in the desert. Fun writer, well above typical weird menace.

Those sound great! Clearly I need to read more by Knox. I've read one or two stories by him, I believe, but I don't really recall. Abilene, Kansas, or Abilene, Texas?

Abilene, Texas. His family had the largest private library in Abilene (Just repeating what I have read, who the heck knows how that would be measured). He wrote regional poetry and was part of the local literary scene, which is a very odd combo with weird menace.

Thanks, Spike. I find this stuff fascinating. I'm going to have to look into Knox and his work. You know Abilene is less than an hour's drive from Cross Plains. Must be something in the water in that part of Texas!

Oh, man, fascinating is putting it mildly! The parallels between Knox and REH are really amazing. It's too bad they never ran into each other. I think they would have been kindred spirits.