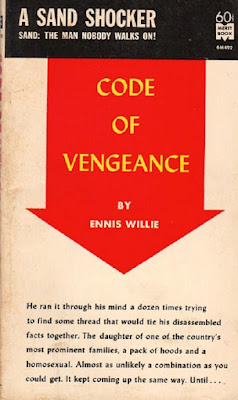 Every time I read a book by Ennis Willie (which isn’t as often as I’d like; the man’s books are hard to come by!), I’m struck by what a wonderful storyteller he was. This is certainly true of CODE OF VENGEANCE, published in 1965 by Merit Books, which features Willie’s series character Sand, who left the mob and has survived all the attempts since then to take him out.


This book opens with Sand walking along a foggy, misty nighttime street in an unnamed city. It’s very reminiscent of the opening of Mickey Spillane’s best Mike Hammer novel, ONE LONELY NIGHT. Then there’s a scream, Sand sees a girl running from a couple of thugs, he intervenes, the girl winds up dead anyway, and—get this—she turns out to be someone Sand knows, a rich society dame who wanted to be his girlfriend a couple of years earlier, although he turned down her pitch. Even though they weren’t romantically involved, Sand sets out to find whoever wanted her dead enough to send a couple of killers after her, which is also reminiscent of Mike Hammer.

Sand’s investigation sees him acting like a private detective, gradually uncovering the connections between the dead girl, her somewhat dysfunctional family (including a couple of beautiful blond sisters), assorted hoodlums, a redheaded stripper, a gay bar (an element of the plot that’s handled pretty sympathetically for 1965), and a fancy sanitarium. Along the way, somebody keeps knocking off people involved with the case and Sand has to survive several attempts on his own life.

It’s a pretty standard plot and fairly easy to figure out (although there’s one late twist I didn’t see coming), but Willie’s magic is in his writing, his full-scale acceptance of these tropes and willingness to run with them at an all-out sprint that kept me flipping the paces breathlessly to see what was going to happen. Throw in the occasional line that verges on pure poetry, and it’s a very winning, compelling combination. It’s early yet, but CODE OF VENGEANCE is the best book I’ve read so far this year.