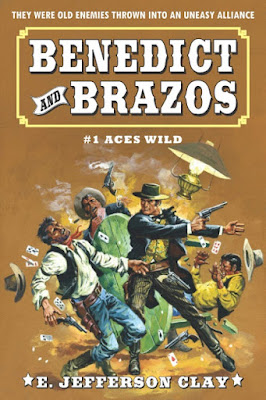 Paul Wheelahan has to be one of the most prolific writers of all time. I wouldn’t be surprised if he wrote well over a thousand novels, most of them Westerns for the Australian publishers Cleveland and Horwitz, under a number of different pseudonyms, the most common being Emerson Dodge. A few of his books under the name E. Jefferson Clay were published (pirated, most likely) in the U.S. by Leisure, all of them in his series featuring handsome, womanizing gambler Duke Benedict and burly saddle tramp Hank Brazos, one a former Yankee (Benedict), the other a former Confederate (Brazos), who fought against each other during the Civil War but then teamed up, albeit reluctantly, for a long series of adventures in the post-war Old West.

The Benedict and Brazos series is being reprinted from the start by Piccadilly Publishing as e-book editions and Bold Venture Press as handsome trade paperbacks. I recently read the first novel, ACES WILD, and thoroughly enjoyed it. It begins in a Kansas cattle town where the two protagonists run into each other months after the war is over, then flashes back to their first meeting during a battle in Georgia, where they fight against each other, then team up to ward off an attack by renegades not loyal to either side. There’s a wagonload of Confederate gold mixed up in the affair, and it’s still unaccounted for when Benedict and Brazos meet after the war.

Along with the missing gold, Wheelahan throws several other things into the plot: a gang of outlaws, a bounty hunter and his beautiful, flirtatious wife, a newly opened bordello, and the leader of the renegades Benedict and Brazos tangled with during the war. The story races along in fine fashion, with plenty of action and interesting twists as Benedict and Brazos not only work together when they have to but also plot against each other when it suits them.

ACES WILD is a really entertaining traditional Western with a pair of likable protagonists, and I’m glad that the books are readily available again. I’ll be reading more of them, you can count on that. Recommended.

As publisher of the ebook editions, I shouldn't really say this, but the first book is really nowhere as good as the second book onwards. Then Wheelahan really gets into his stride, and Benedict and Brazos become characters you really care about and want to follow!

As publisher of the trade paperbacks (Thanks, Ben and Mike!), I'm inclined to agree with Ben. The first issue is terrific ... but the future stories are better!

Paul Wheelahan spends some time introducing Benedict and Brazos, establishing their backgrounds and personalities, but he keeps the plot moving at a brisk pace. The dynamic recalls Ham and Monk in the "Doc Savage" series, but more developed than simple name-calling and pranks. They hail from different backgrounds and their conflicting loyalties put them at odds with each other, and sometimes with the people they intend to help.

Pulp fiction is often accused of being short on characterization ... But Wheelahan manages the character/action ratio so well, he elevates the medium. "The Big Ranchero" (#3) and "Cry Riot!" (#6) are rip-snorting pulp fiction … but they’re also great literature.