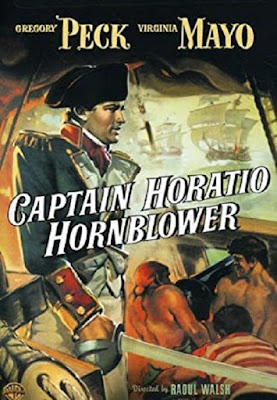 This is another movie that played frequently on TV when I was growing up, but I never watched it until recently. I'm not a fan of the Hornblower novels by C.S. Forester. I read one of them when I was in high school, many years ago, and remember enjoying it, but I never read the rest of the series. I like a good historical naval adventure yarn now and then, though, so this seemed like a good bet. And it was. I enjoyed CAPTAIN HORATIO HORNBLOWER a great deal.

This is a movie that's just packed full of plot, and that's not surprising since it's based on not just one novel but rather three, BEAT TO QUARTERS, SHIP OF THE LINE, and FLYING COLOURS, the first three Hornblower novels published. Because of that, the story just races along, with Hornblower and the crews of the ships he commands getting mixed up in one perilous adventure after another. Raoul Walsh was just about the perfect director for a big-scale, fast-moving epic like this that's mostly action but does have a few quieter, more poignant moments mixed in.

Gregory Peck is great as Hornblower, and Virginia Mayo is very good as the English lady who Hornblower has to rescue before falling in love with her. Neither of them seem to make much attempt at a British accent, which is probably a good thing. I had no trouble accepting them as English despite that. Supporting actor James Robertson Justice almost steals the show as a big galoot of a British sailor.

The battle scenes actually do steal the show. They're some of the best, most realistic-looking naval battles I've seen in a movie. I'm not sure how Walsh and his crew accomplished this, but they did a fine job. And there are sword fights, always a plus in any movie.

CAPTAIN HORATIO HORNBLOWER is old-fashioned Hollywood filmmaking and a thoroughly enjoyable movie. I had a wonderful time watching it.