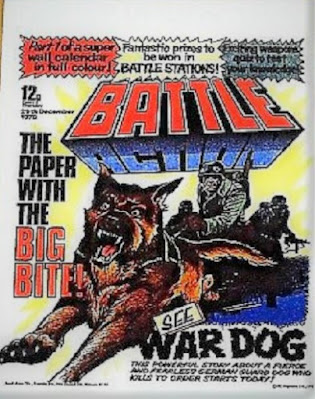 WAR DOG is a 16-part serial that debuted in the December 29, 1979 issue of the British weekly war comic BATTLE ACTION and ran for several months on into 1980. The art on the first five of the three-page episodes is by Mike Western. Cam Kennedy is responsible for the art on the rest of the serial, which was written by Alan Hebden. This is an absolutely outstanding World War II yarn featuring a protagonist who never says a word, and we’re never really privy to his thoughts. I’m talking, of course, about Kazan, the massive German Shepherd, who, as this story opens, is a guard dog at a Luftwaffe base in Russia.

Kazan winds up in the hands of some Russian partisans, and that’s just the start of a journey that finds him taking part in an Arctic convoy, getting in trouble in England, barely escaping a bureacracy that wants him dead, serving masters in several different armies, surviving a plane crash in the Libyan desert, being pursued by a madman who wants to kill him, and finally encountering an unexpected destiny. I’m used to plot twists in Hebden’s scripts, but they come so fast in this story that it’s almost dizzying. And just when you think Hebden’s going to push things so far over the top that you have to say, “Oh, come on!”, darned if he doesn’t make it all come together and make perfect sense.

I really enjoyed this one. It’s a great story with epic scope and a very likable protagonist, and the artwork by Western and Kennedy is richly detailed and top-notch all the way through. Garth Ennis has reprinted this in the second volume of his BATTLE CLASSICS series, and I give it a high recommendation. Also in that second volume is FIGHTING MANN, a Vietnam-set serial also by Hebden and Kennedy, and I’ll probably be reading that one soon. A year ago I knew about COMMANDO but was unaware of the wealth of great material in the other British war comics. I’m having a fine time reading them.