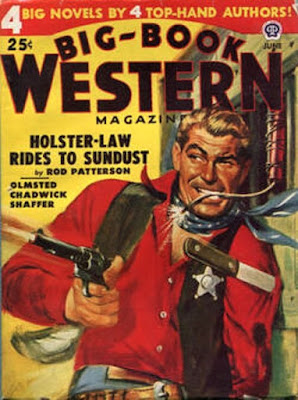 What a great cover! I think the art is by Robert Stanley, but I'm not sure about that. The artist has really piled trouble on this guy. Evidently he's being shot at, he has a knife wound in his arm, he's in jail, and he's about to get blown up! What's next? A coyote's going to drop an anvil on his head? The stories in this issue sound pretty darned good, too, with authors like Harry F. Olmsted, Giff Cheshire, Joseph Chadwick, Rod Patterson, C. William Harrison, and Ray Townsend. Like the other Popular Publications Western pulps, BIG-BOOK WESTERN was consistently entertaining.
Posted by James Reasoner at 6:02 AM

Yosemite Sam always struck me as a very pulp-like character.

The guy’s predicament is hilariously over-the-top! I’m amazed the artist resisted including an Injury To Hat motif, with his Stetson in mid-air with a bullet hole in it.

Style-wise, it does look like it could be Robert Stanley (and the guy’s face looks a lot like Stanley’s own ruggedly handsome pan, as seen on dozens of his Mike Shayne covers). But it also looks kinda like the work of Sam Cherry. In any case, it’s GREAT.

Yeah, it's the Mike Shayne resemblance that made me think it's Stanley's work. I love those Shayne mapback covers.

Just posted about the Shayne covers on Facebook before seeing the mention on the blog. I should always go to the blog first.

Does he even have a left arm? I don't see it, would add to the "gonzo"ness of the cover.

Yeah, his left arm is hanging down at his side. That sleeve is pinned to the wall by the knife. It's kind of deceptive because you can't see the hand on that arm. But that part is outside the vest, so it has to be his arm. I wonder if the hand is in Stanley's original painting.