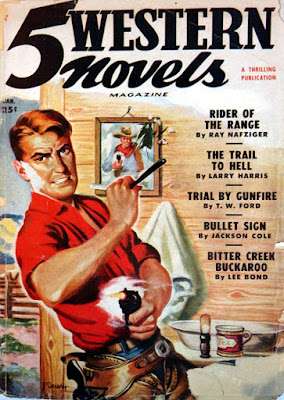 See, that's why I don't like to shave. It gives them dern bushwhackers a chance to sneak up on yuh! But I do like this cover painted by Joseph Dreany. 5 WESTERN NOVELS MAGAZINE was mostly a reprint pulp. All five of the lead novelettes in this issue were publishing originally in THRILLING WESTERN and THRILLING RANCH STORIES during the Thirties. But with a line-up of authors like Ray Nafziger, Lee Bond, T.W. Ford, Larry Harris, and whoever wrote the story as Jackson Cole, I wouldn't mind the reprints. There are also three short stories, evidently new, by Noel Loomis, Dupree Poe, and John C. Ropke.
Posted by James Reasoner at 3:30 AM

Thanks for these Sat morning posts!

I don't post as much as I used to, but I hope to keep going with the Forgotten Books and weekend pulp posts for the foreseeable future, at least. I'm glad folks are enjoying them!

Another reason the later Larry M. Harris might publish as Lawrence Janifer I hadn't fully considered. Aside from wanting to reverse the Ellis Island insult to the family....(lessening potential confusion with other Larry Harrises as well as reclaiming the Janitor recast as Harris...I guess "Janifer " might've sounded like "Hannifer" to the "helpful" immigration agent.)

Yeah, I got the Western writer and the SF writer mixed up more than once . . . although I haven't read a great deal by either.

Wow,,,spell-checker "corrected" one of my Janifers. That's how AI gets one...or bushwhacks...

And he was Laurence Janifer in later years...that typo mine alone.

Keep posting, James! Your stuff adds color to my day.