A Million Words and Counting 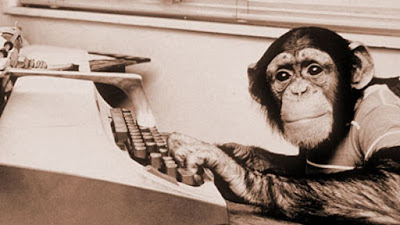 A little while ago, I reached the million word level for this year, which makes fourteen consecutive years I've written that much fiction. Every year I think I'm not going to make it, and then I do. Every year I say that I probably won't write that much next year. Well, I do need to write that much next year, or at least pretty darned close, and you know if I get close I'm going to go for it. But year after next, now . . . Yeah, that's my story. Year after next.

Thank you to everyone who makes this possible, especially Livia, Shayna, and Joanna. I couldn't do it without you.
Posted by James Reasoner at 4:17 PM

Some pulpster, I forget who, once wrote, "It's a great life if you don't run out of words." I'm guessing you must feel the same way.

That's a great quote. Words to live by! I do sometimes feel like I'm running out of words, but I haven't yet.

Again, every year, you’re achievement is a model to strive for. So, have you ever gone back and compared your numbers to the pulpsters of the 30s and 40s? Also, what was your word count 15 years ago? The last year before you hit your first million.

Another great year - congrats, I am, again this year, in awe of a million words. One million is my output for four or five years. Keep it up and Merry Christmas.

Scott,
It's hard to know exactly how much the pulpsters wrote, but I've seen estimates that say Frederick Faust wrote approximately 30 million words and H. Bedford-Jones around 26 million. I'm ahead of HB-J and closing in on Faust, but it's also important to remember that I've been at it longer than either of those two. Faust produced his work in a 26-year period, so he averaged more than a million words every year his entire career. I doubt if anyone will ever top that. I think I'm probably ahead of such prolific pulpsters as Erle Stanley Gardner, Walter B. Gibson, and Lester Dent (in wordage only; I can't touch their sales!), but there are a number of authors still working who are probably upwards of 20 million words now, mostly my colleagues in the house-name field. The last year before I hit a million words, I wrote somewhere between 800 and 900K, so considering how much I went over a million some years, it's safe to say I've averaged a million plus for 15 years now.

James, since you have a blog called ROUGH EDGES and you feature pulp covers each weekend, not to mention the discussion group WesternPulps, it is only natural and just that you also be a million a word man. Congratulations and I hope you continue this streak for many more years

Anthony Trollope wrote 3,000 words a day in three hours before breakfast and then went off to run the Post Office. In winter he went fox-hunting three days a week as well. If he finished a book before he'd done his 3000 words he immediately began another.

Congratulations again, James! One million equals 10 lakh words in my neck of the woods, and honestly, I can't wrap my mind around that figure. Merry Christmas to you and your family!

Trollope's got me beat there. I've finished a book in the morning and started another one in the afternoon a number of times, but never during the same writing session that I recall.

I'm a little afraid to count up my words. I suspect it's less than a million. :)

I don't know whether Trollope counted "The End" and the title of his next book as part of his 3000 words!

My grandfather was Seven Anderton and I sure would love to read one of his stories before I die. Please contact me at 808-224-4880 if you can help me out. Aloha, Robin.