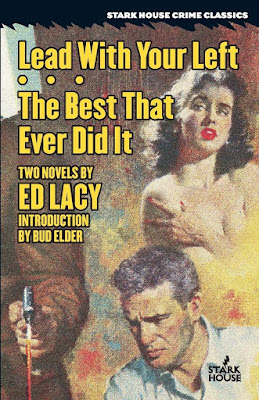 Ed Lacy, whose real name was Leonard Zinberg, was one of the top hardboiled writers of the Fifties and Sixties. His novel LEAD WITH YOUR LEFT was published first in hardback in 1957 by Harper and reprinted in paperback by Pocket Books. It’s being reprinted, along with another Lacy novel called THE BEST THAT EVER DID IT, in a new double volume from the always excellent Stark House. 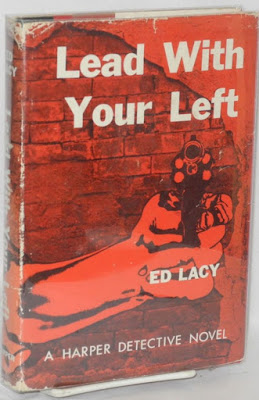 The protagonist/narrator of LEAD WITH YOUR LEFT is Dave Wintino, former boxer and army vet and, as the book opens, the youngest detective in the NYPD. He looks even younger than he really is, which leads people to underestimate him, but despite his relative lack of experience, Dave is a dogged investigator. He has problems at home, though, with an ambitious wife who doesn’t like him being a cop and wants him to take a job with her uncle, who runs a freight business. 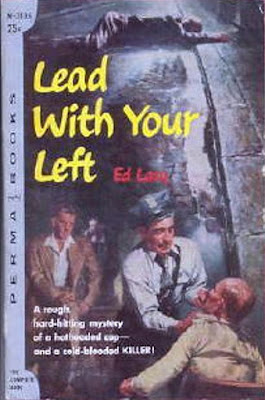 Dave is part of the team investigating the murder of a retired cop who worked as a messenger for a brokerage house. The case goes nowhere, and Dave gets somewhat distracted working on a complaint from an attractive young female writer who’s being harassed. Then the former partner of the retired cop who was killed winds up being murdered, too, and Dave is sure that the case is even bigger than it appears to be. So sure that he starts working on it despite being ordered to drop it, risking his career, his marriage, and ultimately his life.

Lacy really keeps things zipping along in this one, which, with its Italian protagonist (Italian/Jewish, actually) and abundance of police procedure, reminded me at times of Steve Carella and the 87th Precinct. Dave Wintino has more domestic drama to deal with, though, than usually crops up in the 87th Precinct novels. Lacy does a good job of tying all the strands of the plot together and the solution to the murders is a satisfying one.

LEAD WITH YOUR LEFT is a very good hardboiled novel from an era that specialized in them. I enjoyed it a great deal and if you’re a fan of the genre, this new Stark House edition is well worth picking up.

These Stark House volumes are SO hard to resist.