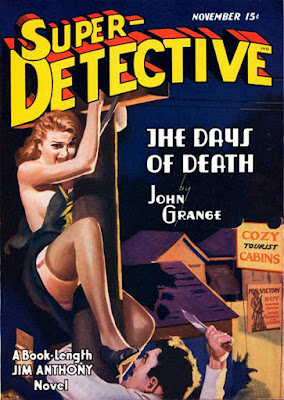 I've never read any of the Jim Anthony stories, not the early ones by Victor Rousseau writing under the house-name John Grange, or these later ones by Robert Leslie Bellem and W.T. Ballard where he's more of a standard hardboiled detective. But knowing Bellem and Ballard's work, I'll bet the stories are at least entertaining. The cover of this issue of SUPER-DETECTIVE is certainly eye-catching. There are three short stories in this issue as well, all of them under Trojan Publishing Corporation house-names, so there's no telling who actually wrote them.
Posted by James Reasoner at 3:30 AM

After reading the first Jim Anthony story I was astonished that Street & Smith had not sued the character out of existence. Even a first year law student could have proved intent to plagiarize.

But, the stories found their own voice. Not to mention got better until towards the end.

One thing makes Jim different from any of the other Hero-Pulp characters is his proud Native American heritage. Given the sorry history of U.S. government relations with the native peoples, Big Jim has plenty of reasons not to trust all and sundry officials trying to pour Kool-Ade in his coffee mug. That means you can write him like you would a very Post Viet Nam character because his people had little reason to trust the government for over a hundred years before that war.

I believe the Altus Press reprint volumes #2 & #3 have about the best of the series before he became almost just-another-PI.