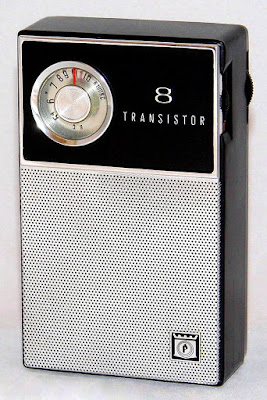 I was too young for the Golden Age of radio drama (although I’ve heard plenty of great Old Time Radio as an adult), but I was right on time for the Golden Age of Top 40 radio. I don’t know exactly when FM radio became popular, mostly in the late Sixties and early Seventies, I think, but in the late Fifties and early Sixties, we were all about AM radio, baby. That was the only band on our car radios and the little transistor radios we carried around in our hip pockets. The sound quality may not have been great, but we listened to them all the time anyway.

My favorite station was KXOL, 1360 on your radio dial in Fort Worth. There were two popular Top 40 stations in Fort Worth, the other one being KFJZ, 1270 AM. You had your KXOL guys, and you had your KFJZ guys. I was a KXOL guy, through and through. There was also a Top 40 station in Dallas, KLIF, but to be honest, I didn’t know anybody who listened to it. Maybe their signal didn’t get over into our part of the country very well.

KXOL had some history to it. George Carlin and Jack Burns worked there as DJs. Bob Schieffer was part of the news department. A couple of national number one hit songs, “Hey Baby” by Bruce Channel and “Hey, Paula” by Paul & Paula, were recorded at a nearby sound studio and had their debuts on KXOL. Paul & Paul were actually named Ray Hildebrand and Jill Jackson and became Christian music artists later on. I saw them perform live at the church I attended, and I’m pretty sure they still sang “Hey, Paula”.

I didn’t always get to listen to what I wanted, though. My dad was a TV repairman, and sometimes I’d go with him when he made his service calls. He listened to a country music station, KBOX (I don’t recall the frequency), and of course the announcers pronounced it just as you’d expect, kaybox, except when doing official station IDs. I didn’t really mind, though. I’ve always been able to listen to just about any kind of music.

During the summers, I spent a lot of time at my aunt’s house in Blanket, Texas, and while I was there I listened to KBWD out of Brownwood. It still exists, but it’s a country station now instead of Top 40 like it was in those days. I remember sitting on the porch of her house with a transistor playing “Light My Fire” or “If You’re Going to San Francisco” while I was reading paperbacks or going through my aunt’s old copies of THE SATURDAY EVENING POST and reading all the fiction.

Another summer, I pretty much lived at my sister’s house, and that was the year I started listening to “Music ‘Til Dawn”, the all-night Easy Listening/Adult Contemporary program I did a blog post about several years ago. Like I said, I enjoyed many different kinds of music and loved what I heard on that program on KRLD out of Dallas.

One thing I liked to do during that era was to turn down the sound late at night, press the radio to my ear, and slowly go through the dial, trying to see how many stations I could hear, and from how far away. When I caught the signal skip just right at night, I was able to hear St. Louis and Chicago pretty regularly, and of course XERF came blasting in from across the border in Mexico. It was all English-language programming, mostly religious, but it didn’t have to abide by FCC regulations.

Along about the same time, I became a fan of WFAA, a Dallas station that was Adult Contemporary during the day and talk radio at night. It was a sister station of WBAP, a country station in Fort Worth, and they had an odd frequency-sharing arrangement. Part of the day, WFAA was at 570 and WBAP was at 820. Then, after a certain number of hours, they would switch frequencies. I never knew why they did this. I’m sure there was some sort of business or regulatory reason. But it made keeping up with them a little difficult. Eventually, WFAA settled into the 570 frequency, and WBAP took over the 820 frequency permanently, where it still is, I believe. WFAA radio is long gone. But I was a regular listener, especially during college, when I seldom missed the late night talk show hosted by Ed Busch.

Radio lost a lot of its charm once I got older and the FM band dominated the industry, although I was a fan of KOAI (“the Oasis”), a smooth jazz station that was in Dallas for a while. And when our daughters were young and I was driving them to school and various activities during the Nineties, I listened to a lot of Top 40 again, only it was their Top 40, not mine. I liked quite a few of the songs, though. These days, we have satellite radio in the car, and I listen to smooth jazz, New Age, classic rock, metal, whatever I’m in the mood for at the moment. Music doesn’t play nearly as big a part in my life as it once did, but still, when the right song comes on the radio, I turn it up. And now and then . . . if I’m by myself . . . and if I hear the opening chords of Three Dog Night’s “Joy to the World” . . . yeah, that’s me bellowing out “Jeremiah was a bullfrog!” at the top of his lungs like an idiot. A happy idiot.

My two AM favorites in the early '60s. Good times.

WLS is one of the stations I used to hear occasionally in my long-distance listening.

While I do t know the stations, I do remember doing the late-night, turn the dial thing. It was so cool when you got a far-away station.

Philadelphia: WFIL and WIBG. On the FM dial, WYSP and WMMR. Every city has its FM and AM history and the culture built around it. Great article on the Fort Worth area's contribution to this genre.

Sundays were special for me because I could listen to what was left of radio's golden age. CBS radio provided two hours of radio drama beginning with "Yours Truly, Johnny Dollar" and ending with "Gunsmoke." As TV wrecked radio the two hours become one. It all ended on Sept.30, 1962...a very sad day for radio. I wonder if the internet will revive the audio drama...I certainly hope so...meantime I enjoy listening to OTR and BBC radio.

KMOA - Oklahoma City, and WLS Chicago on my best Christmas present ever, my own clock radio. - Sometime in the late 1950s

I got a very nice AM/FM desk radio for Christmas 1967. I know the year because I remember sitting and listening to it that day while I read THE SHADOW: DESTINATION MOON (one of the Belmont paperbacks written by Dennis Lynds), which I also got for Christmas that year. I used the radio for many years after that.

I grew up in the opposite end of North America to you - northern Manitoba. In the summer we had to wait until it got dark to bring in the 50,000W US stations such as WLS, WGN and WHAM in Chicago, WCCO and KSTP in Mineapolis/St.Paul, KOA in Denver and stations in Detroit, St. Louis, Salt Lake City and Des Moines/Council Bluff. In the winter when it got dark around five p.m. they would usually come in loudly by 7 p.m. The only regular stations during the day were one from Flin Flon and a CBC station that broadcast network programs out of Watrous, Sask. We never seemed to reach south to stations in New Orleans and Memphis that I knew about or west of the Rockies. Howvever, a few years ago at about 5:30 in the morning when I was driving south to my home in Winnipeg, I somehow pulled in a Seattle station for a few minutes before it faded out. Maybe the signal was bouncing off the Northern Lights.

Oddly enough, my intro to old time radio drama was a local am station in the 60s that played “I love a Mystery” (and other OTR). Got me hooked. Also remember anxiously listening to that same station on snowy mornings, hoping for school cancellation.

Listening to baseball games from far off stations was my biggest thrill.

When I was a kid I knew guys who were fans of the baseball Cardinals because the broadcasts on one of the St. Louis stations came in well enough to listen to on most nights. They might have a lot of static at times, but we could tell what was going on.

This was such a delightful post. It rekindled my own childhood memories of transistor radios and British-make Murphy Radios, when we used to listen to old English songs every Saturday night in the seventies. I don't remember AM but we had short wave and medium wave frequencies. I have never really bothered listening to FM. It lacks the charm of the old radio stations.

Prashant--in the US, our AM is medium wave. All North America, in fact.

New radio drama was good to have on CBS Radio in 1979...I'd listened to the CBS RADIO MYSTERY THEATER sporadically from its beginnings (when I could find a station running it...too often, I was DXing WCBS or the Boston CBS station from Connecticut...but after moving with my family to Honolulu in 1979, we (my brother and me and my parents) lived for the summer in a one-bedroom condo in Waikiki...and at night, that often meant the folks were watching MISSION: IMPOSSIBLE repeats in the living room (and my brother and my bedroom), so some nights I'd retire to the bedroom and listen from 8-10p HT to the Honolulu CBS station running THE SEARS RADIO THEATER and CBS MYSTERY, which ran from Monday to Friday. They didn't average as good as JOHNNY DOLLAR or SUSPENSE or LUX RADIO THEATER, but they were often fun, if I didn't feel like going down to the lobby and reading (it was quieter down there). (At 14, I wasn't gregarious enough to go cruise the beaches and see what trouble I could get into.)