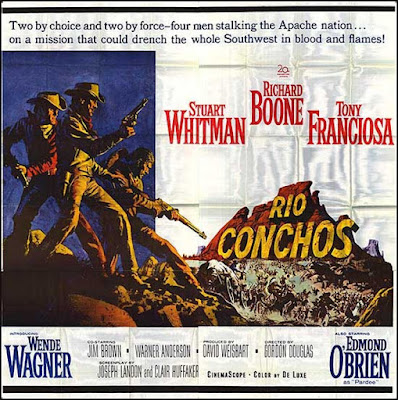 Livia, bless her heart, keeps finding Western movies for me to watch that somehow I never saw before. I've been aware of RIO CONCHOS ever since it came out in the Sixties. It ran on TV dozens of times after that. I've seen the novel by Clair Huffaker that it's based on and may even have a copy on my shelves somewhere. But I had never actually watched the movie until now.

Richard Boone, one of my all-time favorite actors, plays an embittered rancher who's carrying out a vendetta against the Apaches because they killed his wife and daughter. He reluctantly joins forces with a couple of cavalrymen (Stuart Whitman and Jim Brown) and a Mexican bandit (Tony Franciosa) to track down a shipment of stolen army rifles that are going to be sold to the Indians by a crazed ex-Confederate officer (Edmond O'Brien). This mission leads them across the border into Mexico and results in several violent encounters with bandits, gunrunners, and Apaches, directed in gritty fashion by Gordon Douglas, an action specialist who made quite a few decent movies in the Sixties and Seventies.

Boone is good as always, and former NFL great Brown has a formidable screen presence. Whitman and Franciosa are okay, but neither will ever be a favorite of mine. The sight of O'Brien's half-finished antebellum Southern plantation house in the middle of the Mexican badlands is a striking, very effective image. One jarring note is a cantina on the Rio Grande that appears to be about four times bigger on the inside than it is on the outside. (On the other hand, maybe it's a Tardis.) The script, co-written by Huffaker based on his novel, ends a little abruptly for my taste. Overall, though, I found RIO CONCHOS to be a good, solid second-tier Western, and I very much enjoyed watching it.
Posted by James Reasoner at 5:30 AM

And beautifully shot in one of my favorite locations, the Moab area especially around the Fisher Towers.

Richard Boone was not on my radar until his TV series, HAVE GUN, WILL TRAVEL, reran on cable. He was a fine actor and the show was one of the best.

This is on a decent Blu-ray 4-pack with TAKE A HARD RIDE, THE LAST HARD MEN, and BUTCH & SUNDANCE: THE EARLY DAYS. I'm with you on that half-built plantation set...very striking and unusual visual treat for the climax.

I have seen this one, but it has been a while - always liked Richard Boone and he was terrific in this one. I agree with Elgin, loved Have Gun, Will Travel.

Apparently Franciosa's performance as the Mexican bandit with the dangerous charm got him cast as Manolito in an up-and-coming TV western series THE HIGH CHAPARRAL. But somewhere in the process Franciosa dropped out, they cast an unknown instead - Henry Darrow - and the rest is history!

Definitely an underrated film that showed that U.S. westerns could be just about as hard-boiled and brutal as spaghetti westerns at the moment when spaghettis supposedly promised something fresh compared to tired old American oaters. I've been impressed by Huffaker as a screenwriter but haven't sat down to any of his novels yet.

Franciosa had a habit of punching out guys on set. May have happened on Chaparal - he got fired from two later series - Name of The Game, and Search.

I don't think Franciosa ever made it to The Chaparral set, other commitments meant he turned down the part before shooting started. Anyway, I don't think he'd have been anywhere as good as Henry Darrow.

I didn't know that about Franciosa's almost-connection to The High Chapparal. I agree that Henry Darrow really made the part his own. I'd heard about Franciosa's brushes with trouble on various sets. Wasn't it James Garner who's supposed to have taken him aside and punched him out for abusing stuntmen?