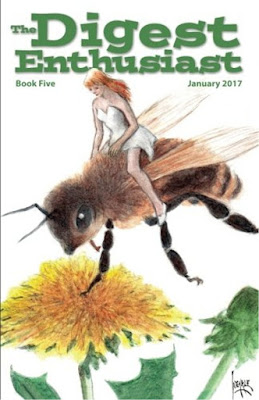 A new volume of THE DIGEST ENTHUSIAST is out, which means plenty of good reading for fans of digest magazines such as myself. For me the highlights of Book Five are a lengthy interview with Bill Crider, my oldest friend in the writing business; Gary Lovisi's review of the fine noir novel HONKY TONK GIRL by Charles Beckman, Jr.; and a couple of articles/checklists by Peter Infantino, one covering the relatively obscure crime digest JUSTICE, the other an extensive look at a magazine I've read a great deal about but never seen, MAGAZINE OF HORROR, edited by Robert A.W. Lowndes. I've long been interested in Lowndes' ability to put out some pretty entertaing pulps on tiny budgets, and he did the same with this digest. There's also a summary by DIGEST ENTHUSIAST editor/publisher Richard Krauss of a 1949 WRITER'S YEARBOOK article by Lowndes about writing fiction for the pulps. Great stuff all around, and highly recommended.

This is an excellent magazine and I have all 5 issues. Highly recommended.

Many thanks for the review, James. Peter’s article about Robert A.W. Lowndes impressed me too. RAWL certainly did a lot with a little. The low-budget covers and production values of Magazine of Horror don’t do its contents justice. Since he leaned heavily on Weird Tales and Strange Tales (among others) for stories, MOH is a great way to read a lot of those stories at less than Weird Tales prices.

The other thing that struck me was RAWL’s passion for the material. His enthusiasm and genuine desire to connect with readers pours out of his editorials.

Thanks for your support, Walker. Wonderful to hear you’re enjoying the series!

Lowndes' Magazine of Horror and its companion digest titles published by Health Knowledge Inc. suffered from patchy distribution and production difficulties that forced delays in their scheduled appearances. So maybe it's not surprising they've eluded your hands in Texas, James.

What is surprising is that in the early '70s remainders reached New Zealand and the bargain basement of an Auckland City department store, now long vanished from the site and occupied by an upmarket hotel. I snapped up a good quantity and sharpened my taste for Weird Tales fare. I'd been introduced to Lovecraft, Howard, Smith, Leiber, and other WT authors by the Margulies/Moskowitz Pyramid paperbacks, which I'd bought in England in the '60s from a Woolworth's store, also as remainders. I'm not a magazine collector in Walker's league but I still have all these traveled publications in boxes that vie successfully for precious space in a retirement villa.

I bought MAGAZINE OF HORROR and Lowndes' other digests off the newsstands in Trenton, NJ and read them mainly for Lowndes editorials and extensive story comments. Later, I also saw many issues remaindered in the area bargain basement bookstores. The distribution must have been terrible for so many issues to show up remaindered. They were selling for 25 cents many years later. I bought them for resale and sold them at Pulpcon for $5.00 each.