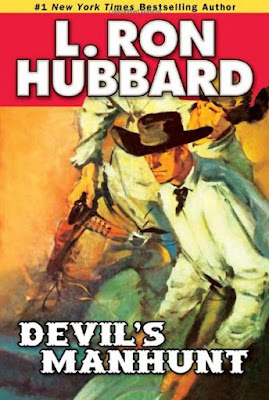 DEVIL'S MANHUNT is another collection of L. Ron Hubbard stories from the Western pulps, and not surprisingly, it's quite entertaining for an old Western pulp fan like me. Actually, these are stories from a particular Western pulp, since all of them originally appeared in FAMOUS WESTERN, one of the Columbia pulps edited by Robert A.W. Lowndes.

The title story, from the February 1950 issue, is yet another variation of Richard Connell's iconic story "The Most Dangerous Game". A young prospector in Arizona strikes gold but is captured by two outlaws who plan to make him work the claim until all the gold is exhausted and then hunt and kill him for sport. The desperate hero comes up with some clever ways to turn the tables on them and wage a fight for survival. This is a really nice tale with plenty of suspense and a satisfying ending.

"Johnny, the Town Tamer" is from the August 1949 issue, has as its protagonist a young rancher from Texas who rides into a Kansas cowtown to settle a score and recover some money stolen from his foreman the year before. It's a clever yarn, and with its Texan hero wreaking havoc in a Kansas town, aided by a big, bearded, buckskin-wearing sidekick, shows some definite Robert E. Howard influence.

Finally, from the December 1949 issue of FAMOUS WESTERN, comes "Stranger in Town", the tale of a young puncher framed for a stagecoach robbery and several murders who is pursued by a lawman with a sinister secret of his own. The showdown comes in the town where the fugitive has settled down.

These are excellent stories, more hardboiled and mature than some of the earlier pulp fare, and typical of the increase in quality of the Western pulps during the post-war years. Because of that, DEVIL'S MANHUNT is my favorite of the Hubbard Western collections I've read so far. It's well worth reading for Western fans.
Posted by James Reasoner at 6:00 AM

Radio Archives had a sale last week, and I picked up about half a dozen Hubbard fantasy collectons for a buck each.

I've not read Hubbard, partly due to his reputatuon after he founded Scientology and the reviews of Battlefield Earth, which came out when I was in high school. Plus I heard L. Sprague de Camp tell some unflattering stories about him from WWII. I have to wonder how much Scientology has affected his reputation as a writer. I know David Drake likes his pulp sf, but I'm not aware of many others who have even read him.

Hubbard has written some good fiction for the pulps such as FEAR and TYPEWRITER IN THE SKY for UNKNOWN and FINAL BLACKOUT for ASTOUNDING. But then he got involved in Scientology...

I enjoy Hubbard's pulp stories, especially the Westerns and adventure stories and some of his SF and fantasy, but I don't have any interest in the Scientology stuff or the later doorstop-sized SF novels he wrote. All the controversy surrounding him kept me from posting about or even reading his pulp stories for a while, but I've got a big pile of the reprints and probably will continue working my way through them.

I've felt the same way about Hubbard. The more I read about him off the page, the less I like what I read about him. But I shouldn't let that cloud reading his fiction - at least, his pulp fiction.

One of his titles, FINAL BLACKOUT, even appeared on Karl Edward Wagner's favorite horror (scifi horror) novels list back in 1983 (Twilight Zone magazine.) So, I at least want to read that, for a start.

I just bought a dozen L. Ron Hubburd audio books (www.goldenagestories.com) at a Library Book Sale. I'll have to check and see if DEVIL'S MANHUNT is among them.

I've got copies of a few of his pulp reprints that I picked up years ago, plus some of the original pulps. I don't recall if FINAL BLACKOUT is one of them. I'll have to see if I can find where they ended up after the last move.

The source for Scientology seems to be AE Van Vogt, who, unlike Hubbard, wrote sf fiction about higher mental states. And ended up abandoning his career to run a West Coast Dianetics branch. He never repudiated it, but left when Hubbard transitioned it into a religion.

I've only read one of LRH's Western collections, but what I have read was perfectly fine. I got it cheap at Dollar General. Very nice printing production as well.

I'm too familiar with Hubbard and Scientology/Dianetics to ever allow any of that stuff into my home.