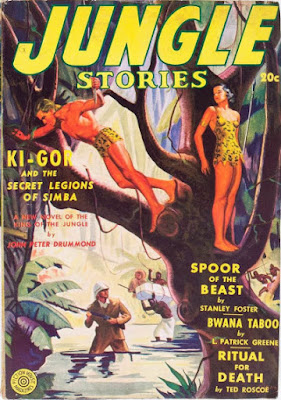 KI-GOR—AND THE SECRET LEGIONS OF SIMBA takes up right where the previous entry in the series, KI-GOR—AND THE GIANT GORILLA MEN, left off. In this story that originally appeared in the Winter 1939 issue of JUNGLE STORIES, Ki-Gor (Lord of the Jungle), Helene Vaughn (beautiful redhead American aviatrix), and their friend George Spelvin (former railroad porter from Chicago who has become the chief of an African tribe) are about to leave Africa for England and eventually America, where Helene will be reunited with her family after crashing in Africa, being rescued by Ki-Gor, and having several adventures with him. At the last minute, though, Ki-Gor decides he doesn't want to leave Africa after all, even though he's curious about his real family. (He knows by now that he's actually Robert Kilgour, the son of a Scottish missionary.)

It's a good thing Ki-Gor backs out on the trip, because before you know it, he's being recruited by British Intelligence to investigate a plot by an old enemy of his who's working with the Nazis to stage a continent-wide uprising that will leave the villain as the dictator of all Africa. This story soon turns into a hardboiled espionage yarn, the sort of menace that would be tackled a couple of decades later by fictional secret agents such as Sam Durell or Joe Gall. How it all plays out is still pretty pulpish, of course, but still, there are no fantastical elements at all and it's a significant departure from previous stories in the series.

The style is different, too, more realistic and almost literary in places. All this leads me to conclude that a different author penned KI-GOR—AND THE SECRET LEGIONS OF SIMBA, the second or possibly third writer to contribute a story to the series. I've enjoyed all of them, but this is probably my favorite so far because it's better written. Although, admittedly, it does lack some of the goofy charm of the earlier ones. It's still a good jungle adventure novel and left me eager to read the next one.

I'm buying the KI-GOR reprint series. Looks like High Adventure at its best! I also enjoyed your INTRODUCTION to John Flagg's DEATH AND THE NAKED LADY/THE LADY AND THE CHEETAH Stark House omnibus that just arrived!

James, if you like THIS, just hold onto your hat. You aren't going to see the true potential of the great ones until you get to number 14. There are a few wretched ones after that, and then a whole string of grand, wild, jungle adventures.