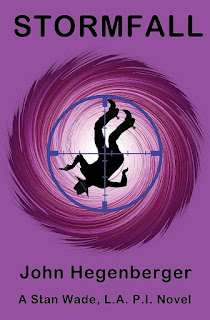 L.A. P.I. Stan Wade is back in STORMFALL, the latest in John Hegenberger's fine series of historical mysteries. It's 1959 this time, and Stan is on his way to Texas, hired by legendary director John Ford to investigate a murder that takes place during the filming of THE ALAMO. The case seems pretty simple, but John Wayne is involved and Ford doesn't want anything to damage Wayne's reputation and stop him from completing his pet project about the iconic battle. Naturally, things turn out to be a lot more complicated than they appear at first, and before the book is over, Stan Wade winds up back in Los Angeles, battling a deadly conspiracy that threatens widespread death and destruction.

As always, Hegenberger does a great job of vividly recreating a time and place, adding plenty of period details without overwhelming his breakneck-paced plot. The Stan Wade series is one of the most purely entertaining around, and STORMFALL is another great one. Highly recommmended.

This sounds pretty good, although McBride's book on John Ford says that Pappy was more an exasperation than a help to the Duke on the set of "The Alamo" -- showed up uninvited and intruded "day after day" when Wayne was trying to direct scenes.