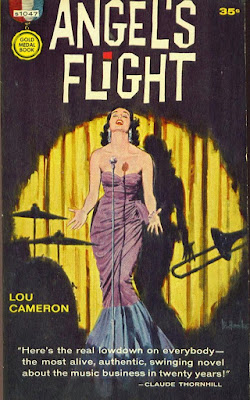 The first novel by Lou Cameron I ever read was probably THE OUTSIDER, a tie-in novel to the TV show of the same name that starred Darren McGavin as private detective David Ross. The TV series lasted only one year, but it was excellent, and I recall that Cameron's novel based on it was very good, too. Years later, Cameron played an important role in my own career by creating the Longarm series for Berkley. He came up with a great character, and I thoroughly enjoyed writing about ol' Custis for 47 books spread out over 18 years. Along the way I read a number of Longarms and other novels by Cameron, including a couple of top-notch Westerns, DOC TRAVIS and NORTH TO DURANGO.

But his best book of all may well be his very first novel, ANGEL'S FLIGHT, published by Gold Medal in 1960.

ANGEL'S FLIGHT is an epic of jazz and the music business encompassing twenty years from the late Thirties to the late Fifties. The narrator/protagonist is Ben Parker, a bass player who as the book opens is part of the jazz combo Daddy Halloway and His Hot Babies. An ambitious young drummer who calls himself Johnny Angel works his way into the band, and it doesn't take Ben very long to realize that Johnny is pure evil and will lie, cheat, steal, seduce, and maybe even murder to get ahead.

The two men clash again and again over the years, through World War II, the post-war era, and then the turbulent Fifties. Ben Parker struggles to succeed while staying relatively honest, even though it makes him some dangerous enemies in the Mob, while Johnny Angel's star continues to rise as it seems he gets rewarded no matter how low he sinks. But finally, even Johnny Angel can sink too low to get away with it . . .

ANGEL'S FLIGHT is a great book. It's raw and mean and just thunders along with some fine storytelling. In its scope and its vivid portrait of American society over a couple of decades, it reminds me a little of Irwin Shaw's RICH MAN, POOR MAN. I've always enjoyed Cameron's work, but I didn't know he had a novel like this in him. I used to have a copy of the Gold Medal edition on my shelves, but I never got around to reading it.

Luckily, Black Gat Books, an imprint of Stark House, is bringing out a reprint edition in March, and I was fortunate enough to read an early copy. This edition features the same Mitchell Hooks cover painting as the original and a fine introduction by Gary Lovisi. It's available for pre-order now, and I give it my highest recommendation. ANGEL'S FLIGHT is the best book I read in 2016, and it might just be the best book you'll read in 2017.

Frankly, you had me at "jazz." Throw in World War II and I'm there. But I very much love modern editions with historical introductions. And that cover... Thanks for the review.

I read several of Lou Cameron's books and enjoyed them all. I have a copy of ANGLE'S FLIGHT around here somewhere. I really like the reprints STARK HOUSE is bring out!

I wonder if the tile is a pun, or a double meaning, also referring to the short traction rail in L.A., where I assume much of this is set. Regardless, it sounds great.

The Angel's Flight railway does play an important part in one scene.

Better than Robin Yocum's A BRILLIANT DEATH? I will have to check this one out.

Better than Robin Yocum's A BRILLIANT DEATH? I will have to check this one out.

Keith,
I hadn't heard of that book, but it sounds really good. I ordered a copy.

It was the best I read last year. I think you'll like it. And apologies for the double comment. I was posting from my phone.

Here's the link to my review of A Brilliant Death:

Cool...the only Caneron I'm sure I've owned is his sf novel CYBERIA, one of my father's old books...this does sound impressive (and a pity he didn't swing this hard for the fences again?)...

Almost all of Cameron's early book are really great reads and they quite diverse in subject matter.

I bought this after reading your post and just read it. You are right, this is excellent. I will have to look for more of Cameron's work.

I haven't read Rich Man, Poor Man, but the book I was reminded of is Budd Schulberg's What Makes Sammy Run?, another portrait of a total bastard.

Thanks for your recommendation.