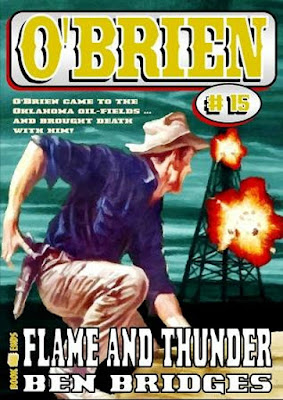 Ben Bridges (also known as David Whitehead) has been writing about the adventures of fighting man for hire Carter O'Brien for a long time, and I've read and enjoyed most of those novels. In FLAME AND THUNDER, the latest of these top-notch Western yarns, O'Brien is hired to protect an oil wildcatter who's trying to strike it rich with a drilling rig on the Kansas-Oklahoma border. The wildcatter's lease is about to run out, and if he doesn't bring in a gusher before it does, a gang of outlaws led by the local saloonkeeper will take it over. Those hardcases will resort to anything to keep the well from coming in, including sabotage and murder.

I've always had a fondness for oilfield stories, and this is a very good one. Bridges does a fine job of capturing the rough-and-tumble setting, and as always, he writes some of the best action scenes in the business and populates his tale with interesting characters. The big battle at the end is spectacular, and the final showdown between O'Brien and the leader of the villains is very satisfying. I really enjoyed FLAME AND THUNDER, and if you're a reader of traditional Western novels, you probably will, too.

Thank you for the review, James. It means a lot.