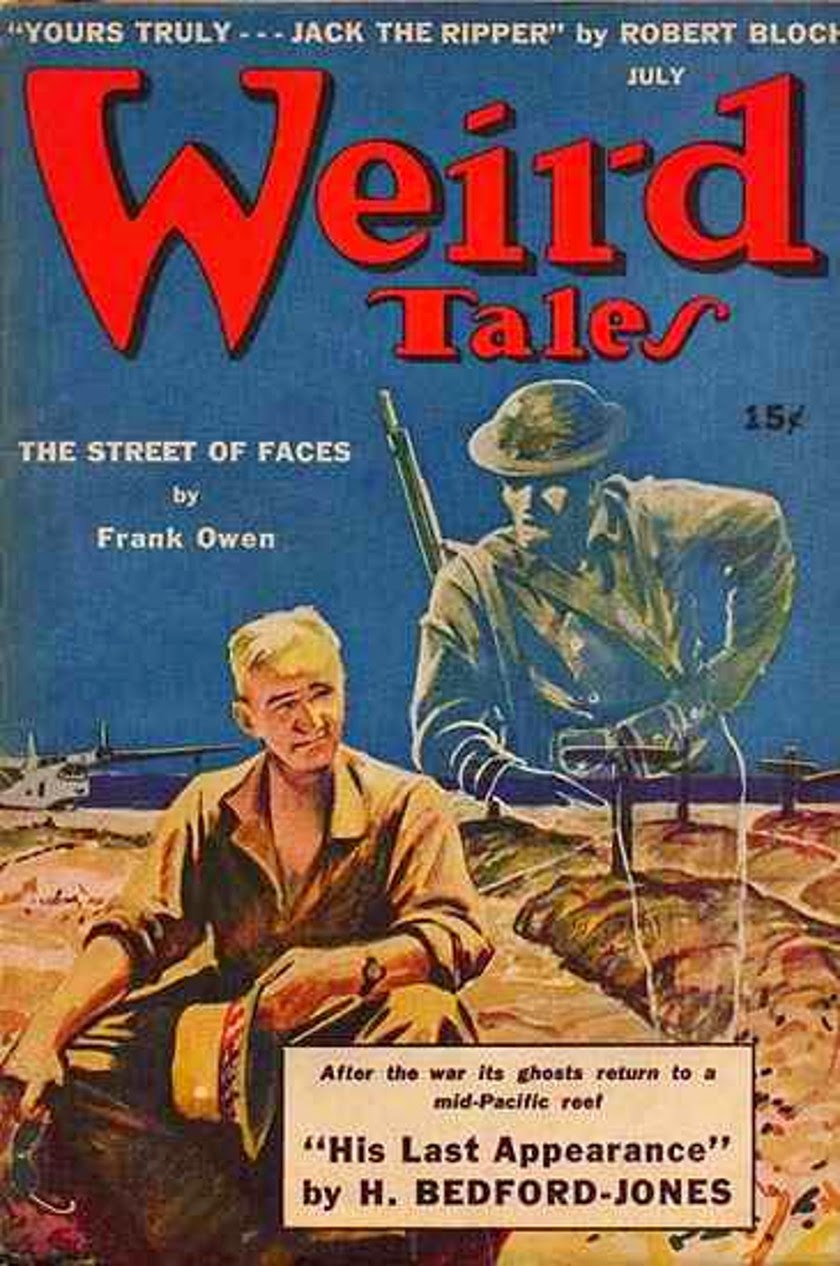 This cover by Franklin Wittmack is on the mild side for WEIRD TALES, but what a fine issue this is. I read it a number of years ago and still recall most of the stories. In addition to Robert Bloch's classic "Yours Truly--Jack the Ripper", there are tales by H. Bedford-Jones, Ray Bradbury, Otis Adelbert Kline and Frank Belknap Long, Frank Owen, Allison V. Harding, and the underrated Harold Lawlor. I know the magazine's glory days were supposedly over by then, but I really like the 1940s issues of WEIRD TALES that I've read.
Posted by James Reasoner at 6:30 AM

I very much agree with you, James, about the quality of WEIRD TALES in the WWII years. Just yesterday I was reading the May 1942 issue which features a great story bu Malcolm Jameson called "Vengeance in her Bones". Magnificent story! The same issue also contains "Black Bargain" by Robert Bloch, and a "Jules DeGrandin story by Quinn. A mighty good valve in 1942 for only 15 cents! /// I'd like very much to read the H. Bedford Jons story in the July '43 issue and will look for it at Pulpfest next year. --Curt Phillips

I have to agree that the WEIRD TALES issues in the 1940's are still enjoyable and of interest to readers and collectors. Many times I've read accounts of the magazine that neglect the forties and stress only the twenties and thirties. But the art and fiction in the forties is often well done. Prices are still fairly inexpensive also.

I'll add my agreement that WT in the 40s is better than generally perceived. Times and tastes were changing, and with Dorothy McIlwraith replacing Farnsworth Wright, the tone of the magazine was bound to be different.

Plus, it's helpful to keep in mind that many of the regulars in the pulps entered some branch of service. This opened slots for new voices. Any time this happens, things will be different. It's fun to speculate about what we lost when those writers entered the service as well as what we wouldn't have from their replacements if the more established writers had continued to write through the war.

Dorothy McIlwraith's WEIRD TALES was Way the hell better than Farnsworth Wright's...the last issues were a little thin on memorable work, but the whole enterprise was winding down...it's notable that ASTOUNDING was "suffering" the same fate, with some of the regular contributors in the fight, so ASF had to rely on the likes of Leiber,Sturgeon, Heinlein, Asimov, Kuttner, Moore...and, oddly enough, so did WT, albeit only one Asimov and one Heinlein story in McIlwraith's pages. Bradbury, in turn, placed one story with Campbell, and Bloch not a few.

I like the 1940's issues of WEIRD TALES but I can't really say they are "way" better than the Farnsworth Wright issues. Since I like the work of Lovecraft, Smith, Howard, CL Moore, and Whitehead, I still have to give the edge to Wright.

The 1940's are a different magazine that's for sure and still enjoyable. McIlwraith was ordered to publish less gruesome fiction so that had to hurt some. But then again she saw the value of humor and was probably influenced by UNKNOWN.

She introduced some new writers with Bradbury being a big find. But it hurt to lose Lovecraft and Howard. Clark Ashton Smith was still alive but only published a few shorts in the 1940's. He had dozens in the 1930's and it's too bad he just about stopped writing fiction.

But both Wright and McIlwraith were interesting editors and we owe them a big thanks for keeping the magazine alive for so long. For many years I had a complete set; now I have a bound set of the 1926-1954 years. The early years of 1923-1925 are available in reprint form and I keep threatening to buy them but the fiction is not that readable.

I'm with Walker in that overall I prefer the Wright WT to McIlwraith's. I'm a huge fan of Howard and Moore. By the 40s, Howard and Lovecraft were dead, Smith had mostly stopped writing, and Moore had moved on to science fiction, most written to some degree in collaboration with her husband Henry Kuttner.

Both editors had an impact on the field by developing writers who went on to become major figures. That's the important point. Arguments about which editor was better is more an argument about taste, really. As Walker pointed out, conditions were different for McIlwraith in what she could buy and from whom.