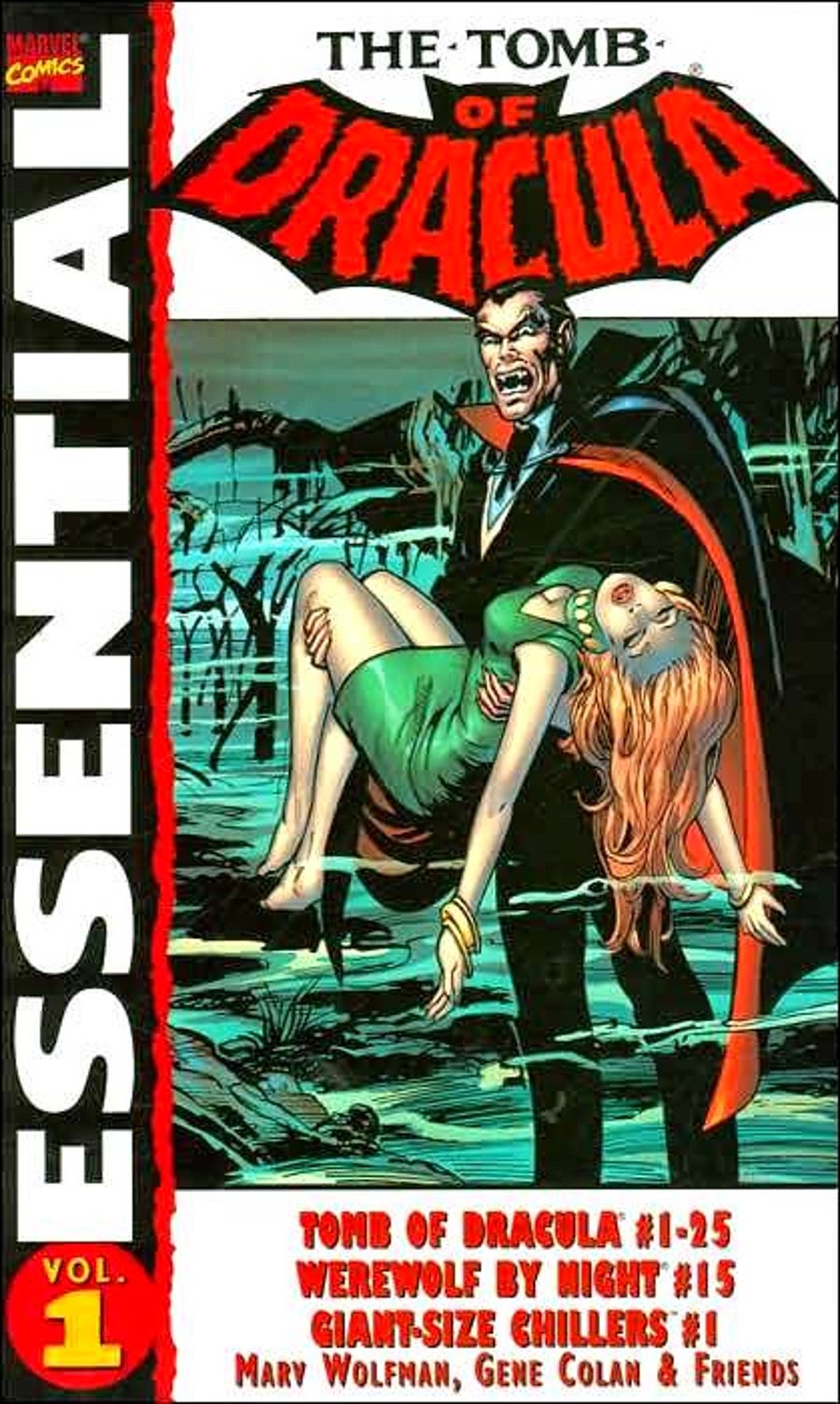 Since today is Halloween, it seems appropriate to write something about the longest-running and many would say the best comic book series about a vampire ever published. I'm referring, of course, to Marvel's THE TOMB OF DRACULA, which ran for 70 issues from 1972 to 1979. Recently I've been reading THE ESSENTIAL TOMB OF DRACULA, VOLUME 1, which reprints in black-and-white the first 25 issues of the comic book, plus one issue each of WEREWOLF BY NIGHT and GIANT-SIZED CHILLERS in which Dracula appears.

The creative team most associated with this title was Marv Wolfman and Gene Colan, but while Colan handled the art from the first (and superbly, too), the writing on the first six issues was split equally between Gerry Conway, Archie Goodwin, and Gardner F. Fox. So it's actually Conway who introduces Frank Drake, one of Dracula's descendants, and his friend Clifton Graves, who makes the mistake of removing a stake from somewhere he shouldn't have and freeing Dracula to roam the earth again. Goodwin expands the cast of characters by introducing beautiful vampire hunter Rachel van Helsing and her Sikh assistant Taj. Frank, of course, joins in their quest to rid the world of Dracula. Fox sort of marks time in his two issues, then in #7 Marv Wolfman takes over the scripting and brings in Quincy Harker, another descendant of a character from Bram Stoker's novel. The wheelchair-bound Harker is the final regular member of the group, and once everyone is in place, the series really takes off.

Colan's atmospheric art is great, and it works really well in this black-and-white reprint. Superhero comics don't work as well in that format, I've found—that type of story really benefits from bright colors—but horror comics hold up just fine. Wolfman's scripts are top-notch, fast-moving morality plays that function as stand-alones much of the time but still manage to move the larger story arcs forward. Blade the Vampire-Slayer, who went on to have three movies made about him, is introduced in the tenth issue and will be a recurring character in the series for a long time.

I bought and read the whole run of THE TOMB OF DRACULA when it was new. I liked it then, but I think I enjoyed reading this reprint volume even more. Some of that is probably due to nostalgia, but really, these are just excellent yarns, and if you're a comics fan or a vampire fan and haven't read them, you definitely should check them out.

At Comicpalooza back in May, I was pulled more to horror comics than superhero comics. I didn't find this one, but I found Man-Thing, Vol. 2. The one superhero thing I bought was The Defenders, Vol. 2, a group that I read rarely back in the day but has supernatural elements. I'm going to have to find Dracula.

I liked this series when it came out and recall the occasional splurge when I could afford 75 cents for the big DRACULA LIVES black & white mag.

Scott -- Steve Gerber did a great job with "weird" during his Defenders run. I always thought DC's VERTIGO line (especially DOOM PATROL) owed a debt to those Defender stories.

One of my all-time favorite comic books.

VAMPIRELLA didn't run longer, or is it disqualified since she's an alien?

My mistake, Todd. Vampi did indeed run longer, both in time and number of issues. And I don't disqualify her for being an alien. Of course in later versions she's not, but I don't really count anything except the Warren issues as canon. I just bought a collection of those early issues, so I'll have more to say about them in the future.