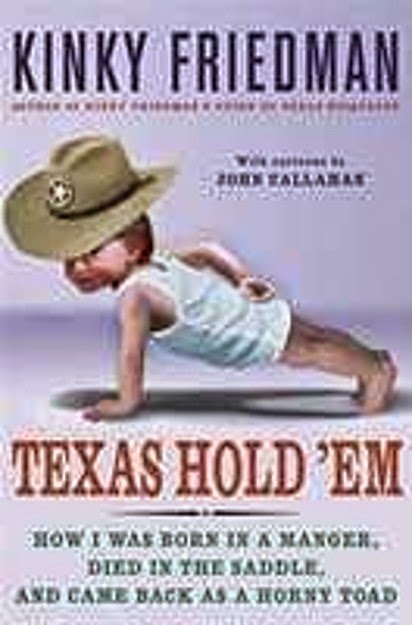 (This post originally appeared in somewhat different form on September 9, 2005.)

I first heard of Kinky Friedman back in the early Seventies, when my good friend Leland DeBusk got interested in the whole Cosmic Cowboy music scene in Austin. After that I was aware that the Kinkster started writing mystery novels, but I never read any of them. (I own several, though, and really need to get around to reading them.) Over the years I read articles and essays he wrote for various magazines, and last year I read and thoroughly enjoyed KINKY FRIEDMAN'S GUIDE TO TEXAS ETIQUETTE. So when I saw his new collection of essays, TEXAS HOLD 'EM, at the library the other day, I didn't hesitate to pick it up. I expected to like it. I didn't know that I would think it's an absolutely wonderful book, one of the best I've read all year.

Friedman writes about a variety of subjects in this book, ranging from humor pieces like "You Know You're From Texas If . . ." to beautifully poignant reminiscences like "The Hummingbird Man" about his parents and the children's camp they ran for many years at Medina, Texas. He's one of those rare writers who can bring tears of laughter to your eyes as he dissects the idiocy of modern life and then nearly break your heart a few pages later with an eloquent tribute to times past and the things we've lost.

In several essays, Friedman also talks about his campaign for the governorship of Texas. The Kinkster's efforts in the political arena have been chronicled in numerous places, so I won't go into detail about them. I will say, though, that I hope he manages to get on the ballot. One of the comments in his dust jacket bio on this book made up my mind for me what I'll do if I see his name on Election Day:

"He wants to take things back to a time when the cowboys all sang and their horses were smart."

Folks, that man has got my vote.

(Update: I still haven't read any of Kinky Friedman's mystery novels. One of these days...Meanwhile, he's run for governor and lost, which is probably a good thing because I'd rather he spend his time writing books.)
Posted by James Reasoner at 5:00 AM

I am a big fan of Kinky's early books as they at least had an attempt at a storyline around his one-liners. I also have his early recordings. Eventually I stopped buying him in hardcover and finally stopped reading him as there was little I enjoyed in the books. I will have to give his non-fiction a try.

I read the first two, and enjoyed them. Met him at a book signing in SoCal and he's as much a character as you'd expect from his music and books. Seemed very much a product of the time, but then aren't we all?

I liked the Kinkster's mysteries but the early one are better. He seemed to lose interest in plots as they went. Still fun, but not as well thought out.