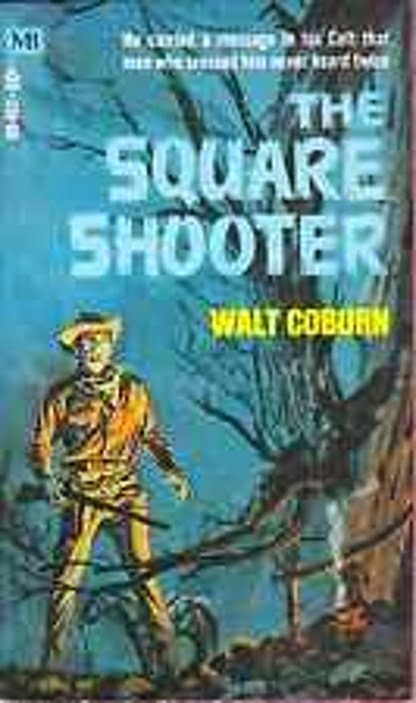 (This post originally appeared in different form on April 25, 2005)

By 1957, when this novel was originally published, Walt Coburn’s once-formidable talent had deteriorated due to age and drink until his output was very hit-and-miss. THE NIGHT BRANDERS, from the same era, is the worst Coburn novel I’ve read. But he was still capable of turning out a good story sometimes, and luckily, THE SQUARE SHOOTER falls into that category.

The plot is one that Coburn used many times: a young man is raised by an outlaw and believes the older man to be his father, only to discover that his past is really a mystery. In this case the young man is known only as Boone, and his outlaw foster father is Jawbone Smith. When he finds out that Jawbone isn’t really his father, Boone sets out to discover the truth about his past, making a deadly enemy out of Jawbone in the process. Boone’s quest involves him with a shady gambler, a judge and his beautiful daughter, a half-crazed mountain man, and assorted owlhoots, all of whom may or may not have secrets of their own that connect them to Boone.

While this plot is nothing new, Coburn keeps a pretty tight rein on it this time, so that all the last-minute revelations at least sort of make sense. Coburn is obsessed with the sins and dark secrets of the past and their affect on the present, and sometimes his plots get away from him and become overly complicated. THE SQUARE SHOOTER avoids this for the most part and provides a fast-moving, exciting story.
Posted by James Reasoner at 5:00 AM

Well, RANCH ROMANCES and TEXAS RANGERS might still be around but he never wrote for them. I don't remember him being in the digest ZANE GREY either.

The disappearance of the western fiction magazines must have made him drink even more and get more and more depressed.

The paperbacks never really became a big market for him, not like the pulps. He even had a couple magazines named after him. Plus just about every month saw his novelets appearing in DIME or STAR WESTERN and WESTERN STORY.

It all ended with his sad suicide by hangimg.