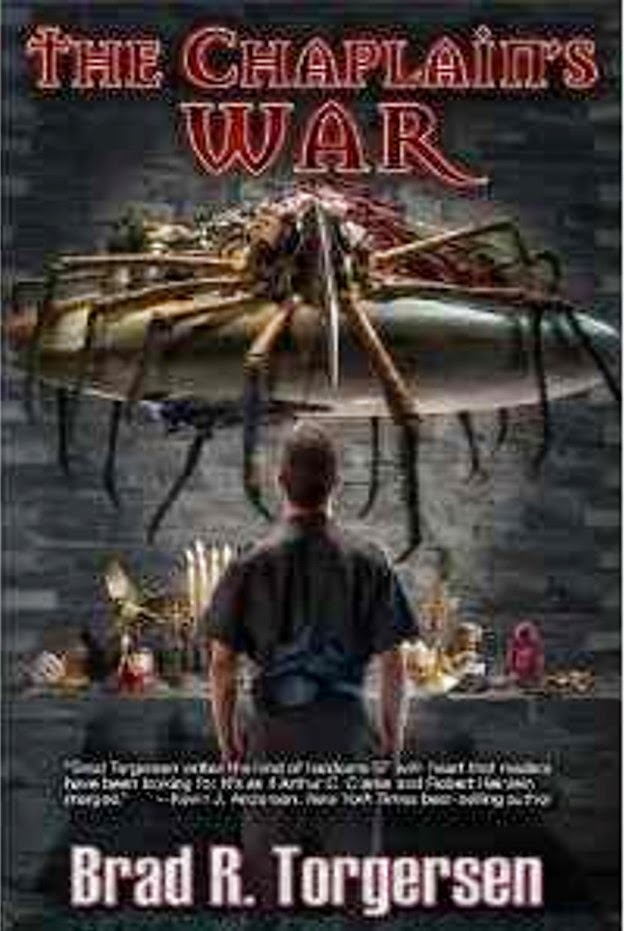 THE CHAPLAIN'S WAR is the first novel by Hugo-nominated author Brad R. Torgersen, and in time-honored science fiction tradition, it's a fix-up of sorts, combining and greatly expanding upon his novelette "The Chaplain's Assistant" and his novella "The Chaplain's Legacy". I read and enjoyed those two stories, but when I read them I felt like they ought to be part of something bigger, and now they are.

Torgersen turns them into a novel by giving us a lot more back-story about Harrison Barlow, the chaplain's assistant who winds up right in the middle of a war between humans and an alien race not once but twice. We follow him through his military training and find out how he came to be a chaplain's assistant, how he prevented humanity's eradication once at the hands of the aliens, and how years later he was forced back into that same position, with the plot continuing considerably past the end of the original stories.

For a big space opera about a galatic war, there's really not a lot of action in this novel. Don't get me wrong, Torgersen does a fine job with the battles and all his military details ring true, but THE CHAPLAIN'S WAR is really a novel of ideas, as the characters on both sides struggle to come to terms with faith and religion and how sentient beings from vastly different backgrounds can learn how to co-exist with each other. Torgersen never lets things get too philosophical, though. There's always a sense of narrative drive that's enhanced by his straightforward prose. He's telling an interesting story about interesting characters, and he does an excellent job of it.

THE CHAPLAIN'S WAR is just the sort of science fiction novel I like, as well as one of the best books of any kind I've read this year. Highly recommended.

I second that recommendation. Torgersen is on my Must Read list.