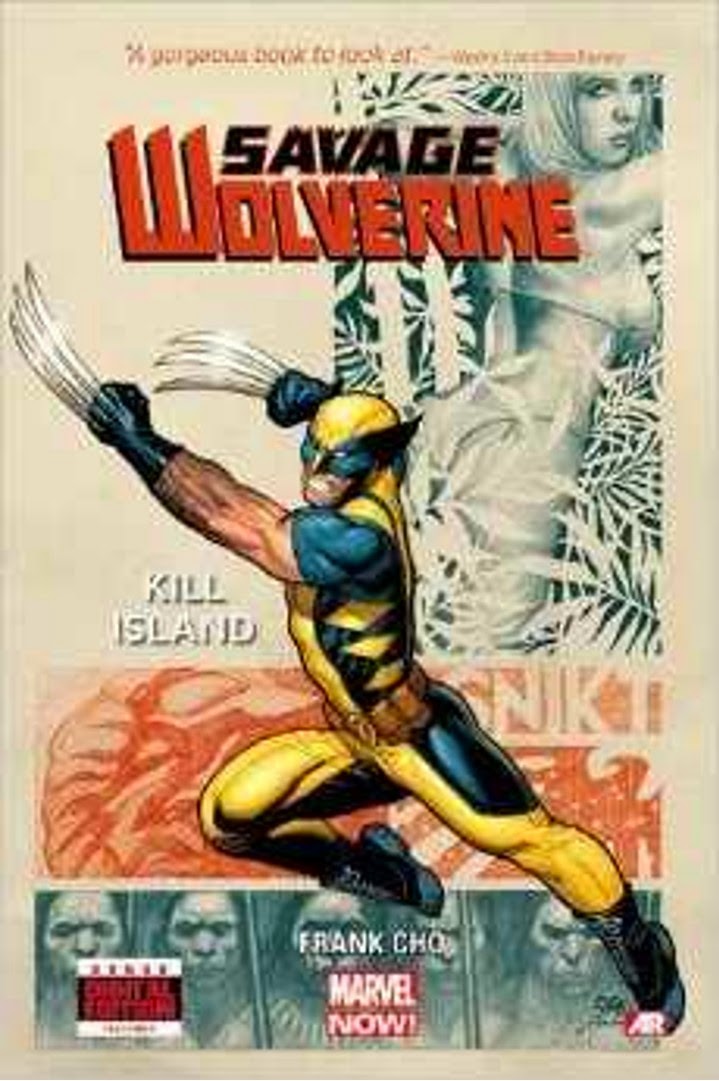 I remember quite well reading the issue of THE INCREDIBLE HULK in which Wolverine made his debut, and I was there when the X-Men were relaunched with him as a member. So I've known the character for a long time and generally enjoyed reading about him. I haven't really kept up with him in recent years, though, other than seeing him played well by Hugh Jackman in various movies.

Not long ago, though, I picked up the trade paperback of SAVAGE WOLVERINE: KILL ISLAND, which reprints the first five issues of a new Wolverine series. The reason I bought this one is pretty simple: it's written and drawn by Frank Cho, the creator of one of my favorite comic strips, "Liberty Meadows".

If you're familiar with "Liberty Meadows", you know it features some of the most beautiful women in all of comics, especially the character named Brandy. Since SAVAGE WOLVERINE: KILL ISLAND finds Logan stranded in the Savage Land and has him teaming up with Shanna the She-Devil to fight a rather Lovecraftian monster that's been trapped there for eons, that was more than enough to get me to pick it up. The cameo appearance by Man-Thing, one of my favorite characters from the Seventies, was just a bonus.

The previous paragraph won't make much sense to those of you who aren't comics fans. For those of you who are, KILL ISLAND is a pretty entertaining yarn. Cho's art is great all the way through. The story's plot is a little thin, and dragging the Hulk and Man-Thing into the plot seems sort of out of left field, but overall it's a nice, action-packed tale. If you're a Wolverine fan, or a "Liberty Meadows" fan, or both, like me, it's well worth reading.

Sounds good. It's as if I were by your side in those first encounters with Wolverine, the Savage Land, Shanna, & The Man-Thing(I always favored him over Swamp Thing).

The first eight or nine issues of Swamp Thing by Len Wein and Berni Wrightson were great, but the series sort of petered out after that for me. I was never that fond of Alan Moore's run on the title, no matter how much the critics loved it. I thought Man-Thing's series was much better overall. I have the Essentials volume from that series and need to find time to read all those stories again.