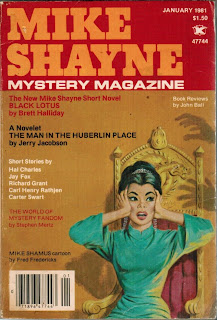 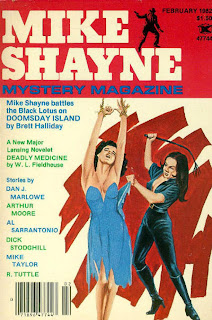 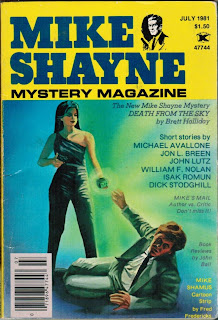 Over on his blog today, Win Scott Eckert mentions three Mike Shayne stories that I wrote for MIKE SHAYNE MYSTERY MAGAZINE: "Black Lotus" (January 1981), "Death From the Sky" (July 1981), and "Doomsday Island" (February 1982). If you want to know why Win's interested in them, you'll have to check out his blog, but I thought I'd post the covers here to stir up some nostalgia, as well as express my disbelief that I wrote these stories more than THIRTY FRICKIN' YEARS AGO! That's hard to believe. It seems like either last week or a millennium ago.
Posted by James Reasoner at 7:19 PM

It's also hard for me to believe that I read those stories more than 30 years ago. Good grief. Where are the snows of yesteryear?

Funny, I just watched Lloyd Nolan playing Mike Shayne yesterday on DVD and thought of your short stories. Great stuff. Thanks for the post.

It's too bad you can't package those up as an e-book. I'd certainly buy it as I never had the chance to read the originals.

I'd love to have them back out there as e-books. I'm not sure who has the rights to them, though. I just know it's not me.

I'm pretty sure I have that issue with the whipping cover. Be jealous, Bill.

I've always liked your Shayne stories. They had a dark edge to them compared to the other authored ones from that era.

I have a few and always have an eye out for the ones I'm missing.

I should have all those issues as I was a subscriber but the third cover does not look familiar.

I see on the second that Dick Stodghill had a story in it. I always liked Dick's stories there and in Alfred Hitchcock, which published many by him. I met Dick a few times and enjoyed his company. I hoped to see him at the Indianapolis Bouchercon as he had a story nominated for a PWA award but he wasn't there. Learned later he was very ill and died just before or just after the convention.

I also discovered he had a 2007 POD collection ROUGH OLD STUFF (From Mike Shayne Mystery Magazine)that reprinted 16 of his stories from MSMM including his fiction debut "Leave it to a Pro" from the July 1979 issue. I recommend this collection if you can find a copy. And I very much regret that I didn't discover it until too late to tell Dick of the pleasure it gave me.

Richard,
I remember enjoying Dick Stodghill's stories in MSMM. We were there about the same time. I didn't know about his collection and will check it out.

James, Dick's Mike Shayne collection is still available through Lulu as is his memoir of the Normandy Invasion as a young soldier in the storied 4th Infantry Division.