Harry Whittington's backwoods novels are some of my favorites of his work. WINTER GIRL sort of falls into that category. It's set in (probably) and takes place in a mixture of rural and small town settings. It's a coming-of-age novel, too, as the narrator, Calder Fenton, is eighteen when the novel begins. And it's a dog story, as well, since some of it revolves around Calder's Irish Setter Fanny, a hunting dog coveted by a rich Northerner who spends his winters in the area. That Northerner, who's a pretty despicable villain, has a beautiful teenage daughter named Lu Ann, and Calder covets her as much as Lu Ann's father wants Calder's dog.
Well, as you can guess, those elements are ripe for a considerable amount of domestic drama, which Whittington exploits for all they're worth like the top-notch professional he was. As David Laurence Wilson points out in his fine introduction to the upcoming Stark House triple volume that reprints WINTER GIRL (along with Whittington's novels RAPTURE ALLEY and STRICTLY FOR THE BOYS), this isn't one of the crime novels for which Whittington is so well known, but that doesn't mean it's lacking in suspense and violence. 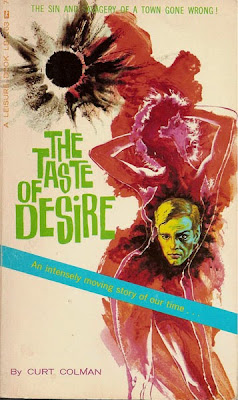 If you haven't heard of WINTER GIRL, that's probably because it was never published under that title during Whittington's lifetime. Instead, it's one of the formerly missing soft-core novels that Whittington wrote for William Hamling's various imprints during the early to mid-Sixties. It was published in 1966 under the title THE TASTE OF DESIRE, as by Curt Colman. Wilson and Stark House have restored the original title, and also edited the book back as close as he could to Whittington's original manuscript, a trunk novel he dusted off, rewrote, and sold to Hamling. In this form, it reads very much like it could have been published by Gold Medal, , or Ace, and I'm not sure why it didn't sell when Whittington first wrote it.
Possibly because after an absolutely fine first two-thirds that ranks right up there with the best of Whittington's work, the final third seems a little rushed to me, especially the ending. However, that doesn't distract from the book's overall impact. WINTER GIRL is an excellent novel that serves as a prime example of Whittington's skill and versatility as a writer. The Stark House volume comes out in February, but you can pre-order it now. I think that's a good idea . . . and I haven't even read RAPTURE ALLEY or STRICTLY FOR THE BOYS yet! (Soon, though.)
Posted by James Reasoner at 6:00 AM

That's good news. I love Whittington, and it's great to see Stark House still putting out his stuff.

I love that Leisure Book cover--the bullet hole with the blood oozing out. seems surprsingly creative to me.