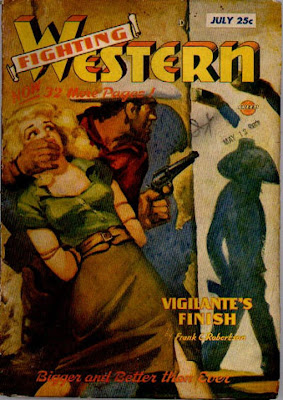 Over on the WesternPulps group, Jonathan Jensen mentioned cover artist Joseph Sokoli, and since I was unfamiliar with Sokoli's work, I looked it up on the Fictionmags Index. Here's one of his covers from a later Trojan pulp, FIGHTING WESTERN. Sokoli did quite a few covers for this title, but I chose this issue because it includes a story by Les Reasoner, who is bound to be a distant relative of mine although I have no idea how we're related. There are also stories by J. Edward Leithead (again), pulp old-timer Frank C. Robertson, Ben Frank, and Larry Dunn (who I believe was really Laurence Donovan). Probably a pretty entertaining issue.
Posted by James Reasoner at 7:00 AM

Is there any way you could bring your Mike Shayne stories to the electronic medium? I just got a Kindle and I want to spend some money. Preferably on a good Michael Shayne story or two.

I wish I could, but I don't have the rights to them, and while I've looked into it, I haven't been able to find out who does. Unlike the stories under my name that I sold to MSMM, I had to sell all rights to the Shayne stories. But I haven't given up on getting them back in print someday, in some format.

I'm sorry to hear that. Thanks for the answer. Always look forward to your entries.

As for the mix of imagery, I sure its because Sokoli did both westerns and Detective ( like Private Detective) for Trojan and very well I might add. Maybe they wanted an updated look to their westerns, different from what else was out there. Jonathan

If it helps track him down, Les Reasoner appears to have been Leslie, not Lester. According to the FictionMags Index, he had three stories published under the latter name in WESTERN ACES, circa 1943.

Is Reasoner a common name?

Thanks for the info, Steve. Reasoner is a fairly uncommon name, and according to a relative of mine who was a genealogy buff, everyone named Reasoner is related. Not only that, but there are a number of variations of the name, and all of those are related, too. So Trent Reznor of Nine Inch Nails and I are related, although cousin Trent may not know that.