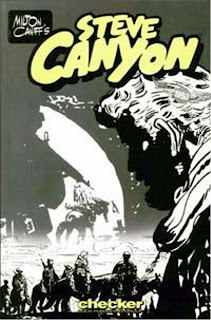 I've mentioned here before how fond I am of Milton Caniff's work on TERRY AND THE PIRATES. I've never liked quite as much, but hey, it's still Caniff, and that means it's well worth reading as far as I'm concerned.
So I didn't hesitate when I came across a trade paperback reprinting roughly an entire year of strips, dailies and Sundays. The year in question is 1950, and as we pick up the story, Steve, back on active duty in the Air Force after several years of running his air transport service, finds himself in helping Chinese guerrillas battle against the Communists who have seized power.
There are five storylines in this year's worth of strips, none of which I had ever read before.  Steve and his Gabby Hayes-like sidekick, Happy Easter, help a British missionary and some Chinese orphans escape from the Red Chinese army, then Steve gets separated from his friends and winds up in an espionage plot when an American traitor tries to sell a "mechanical brain" (obviously an early computer) prototype to the Communists. The scene shifts back into the hills for some more adventures with the Chinese guerrillas, but the hero in these is young Reed Kimberly, a friend of Steve's. Finally, Steve travels to , or French Indo-China as it's called then, to help track down a gun-runner known as "Monsieur Gros", or Mr. Big.
This is fine stuff, full of plot twists and action and humor, and Caniff's artwork is packed with details the likes of which you won't find in many comic strips today. It certainly doesn't hurt anything that several beautiful femme fatales such as Madame Lynx, Cheetah, and Herself Muldoon show up in these yarns. They don't quite reach the same level of sultry dangerousness that Caniff's previous creation The Dragon Lady did, but who could?
For my money, TERRY AND THE PIRATES is the best adventure comic strip of all time, just as Milton Caniff is the best adventure comic strip creator of all time. But is mighty darned good, too. I had a great time reading this collection, which was published by Checker Book Publishing Group in 2005. Checker published several other collections, and you can bet I'll be tracking them down.
Posted by James Reasoner at 6:00 AM

I followed the Canyon strips for years in the comic pages. It was a favorite of mine.

Caniff was a little before my time, but I'm going to have to look him up.

Steve Canyon was number 2 for me in the papers, right after Buz Sawyer

I had a deprived childhood, never having followed either Steve Canyon or Terry and the Pirates; neither strip appeared in newspapers my family read. For some reason neither television series drew my attention. Like Keith, I'm going to have to remedy this.

IDW's Library of American Comics is going to be doing a nice hardcover reprint series of Steve Canyon starting in January. It's supposed to be in the same format as their gorgeous Terry & the Pirates series, so larger strips than the Checker books, better reproduction, and Sundays in color. I'm looking forward to that.

Our local newspaper never carried STEVE CANYON, but I remember George Wunder's continuation of TERRY AND THE PIRATES being on the front page of the comics section every Sunday when I was a kid. I never read it then, didn't care for Wunder's art, and the stories didn't appeal to me at that time. I read some of his work reprinted years later and thought it was pretty good, though not up to Caniff's level. The adventure strips I liked as a kid were DICK TRACY, BUZ SAWYER, SMILIN' JACK, and a long-forgotten one called PETER SCRATCH.

I'm a fan of Terry and the Pirates and Steve Canyon. I need to start buying these reprints!

Steve Canyon was carried in the paper we got each day back when I was a kid. It was far tamer by then (the 1960s till the strip ended) than those knuckle-bustin' early days of the strip. But it stood out to me, even as a little kid, for the interesting art. Also running the funny papers at that time was Nancy (with the true hero of the strip, Sluggo), Kerry Drake, and prolly some other interesting things (if I can recall after all these years). Canyon was the most interesting, after B.C., for me.

I'd almost forgotten Steve Canyon. I used to enjoy these a lot.