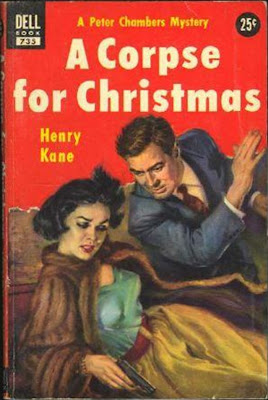 I wanted to write about a Christmas book today, and this one was handy and turned out to be a good candidate. Lawyer-turned-author Henry Kane introduced his New York private eye character in A HALO FOR NOBODY (1947) and continued the series in novels and short stories throughout the Fifties and Sixties and on into the Seventies.  Unfortunately for the reputations of Kane and his character, those later novels changed from traditional first-person hardboiled private eye novels into third person, sex-heavy potboilers in which Chambers played a smaller part. Or so I've heard. I've never actually read any of them, although I used to own some of them.
Starting out, though, the Peter Chambers series was a very well-regarded entry in the genre, and this novel from 1951 is a good example of why. I read quite a few Kane novels thirty or forty years ago and may well have read this one, but I didn't remember it so chances are I didn't.
It starts out on Christmas Eve with Chambers, a self-described private richard, doing a favor for another PI, the beautiful model-turned-detective Gene Tiny. Of course, the seemingly innocent little errand turns out to include a dead body, the discovery of which immediately catapults Chambers into a complicated case involving an eccentric scientist who's supposed to be dead but isn't, a fortune in stolen jewels, more murders, gangsters, a crematorium, and a number of beautiful women, all of whom are, of course, attracted to our boy Pete.  All of it culminates in a gathering of the suspects on Christmas Day like something out of a more traditional mystery.
In his wise-cracking and colorful use of language, Chambers comes across as sort of a toned-down, East Coast cousin of Dan Turner. And like Robert Leslie Bellem, Kane was a pretty good plotter with the ability to throw in a lot of bizarre, seemingly unrelated elements and have them make sense in the end. There's not a lot of Christmas atmosphere in A CORPSE FOR CHRISTMAS, which was later reprinted by Signet as HOMICIDE AT YULETIDE, but Kane makes use of the fact that it's snowing to include some White Christmas references.
While I don't think the Peter Chambers novels belong in the top rank of private eye fiction, the early books in the series are well written and highly entertaining. As far as I know they're all out of print but fairly easy to obtain in used copies, especially the paperback reprints from Signet, Dell, and . If you're a private eye fan and haven't tried a Peter Chambers novel, you should check them out. I thoroughly enjoyed this one.
Posted by James Reasoner at 6:00 AM

I have only come across the later, downgraded Kane fiction, for the most part at least, so it's good to know that he was trying earlier on...shall have to give this or the other early Chambers fiction a try if it pops up.

Like you, I read a bunch of these many years ago. I got a kick out of them, too. What amazed me was how many different publishers the Chambers books appeared from. About the only one missing is Gold Medal.

I like Kane. I like his humor. Coincidentally, I've been watching some episodes of the early tv show "Martin Kane, Private Eye", and noticed Kane wrote the scripts for a number of them.

I'm reading this book right now! I like it. A lot!

I first came across Henry Kane at a hospital. People picked up and left all sorts of fiction and non- fiction. My first Kane novel was "Who Killed Sweet Sue" I was absoluetly hooked. Pete Chambers is like a dirty-minded Archie Goodwin. So what if he is semi-pornographic. It's a damn good read, and a film noire experience. You'll never look as Rita Hayworth or Gene Tierny in the same way again.

I've just found this site! I was given this book by my mum as a child, and I read it every Christmas Eve!!! I am now 56, it is one of the Christmas traditions in our household! Wouldn't be Christmas without this story. Happy days.