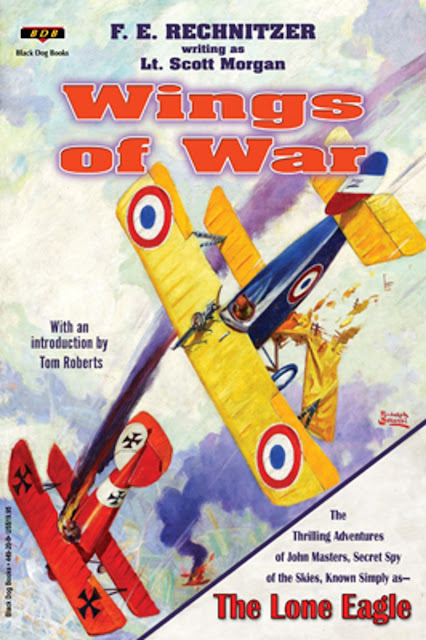 Our latest title, Wings of War, collecting the first two novel-length adventures of John Masters, The Lone Eagle, is now available for purchase.

Visit our Wings of War listings page to learn more or order your copy today.

Pilot extraordinaire John Masters was an ace operative of the U.S. Secret Service when war broke out. So it was only natural that when the first squadron of Yank flyers went to France to strafe the Boche, Masters went too, only operating undercover.

Masters became the Lone Eagle of the Skies, displaying an indomitable courage and dynamic driving power to push any secret mission to a successful conclusion; a fighting ace whose dark and inscrutable movements became the scourge of all enemy powers.

Suspected by many, some men feared him, some men hated him. The alluring but deadly female German spy R-47 may have loved him. Masters became that mysterious Nemesis of the Western Front known only as—The Lone Eagle!


"John Masters blasts his way across the skies in the kind of aerial action that will thrill modern readers as much as it did the pulp readers of the '30s. The Lone Eagle is a hero for the ages!"—Bill Crider, contributing author to the Nick Carter and Stone: M.I.A. Hunter series

"In the 1930s, the Lone Eagle set the bar for realistic action adventure with a tough guy loner able to survive against all comers. John Masters blazed a bullet-strewn path that series heroes of the 1970s and 1980s were hard pressed to follow."—Mel Odom, contributing author to the SuperBolan, Stonyman and Executioner series

"Combat ace John Masters was one of the most realistic air heroes of the pulp era. It's about damn time these bullet-torn tales were reprinted!"—Will Murray, contributing author to the Destroyer series


(I've read both of these novels and really enjoyed them. These aren't the wild, science-fictional adventures of G-8 and his Battle Aces. The Lone Eagle novels are grim and gritty, with an emphasis on espionage and excellent aerial combat sequences. If you've never tried this series, I highly recommend it.)
Posted by James Reasoner at 5:52 PM

Looks good. I'll check it out. I read one of the G-8s and didn't much care for it.

Depends on how authentic it was from a war flying, slang etc perspective.

The biggles stories of Captain WE Johns were "boys adventures" but the atmosphere in the WW I stories was spot on.

Rechnitzer was a pilot during the war and shot down at least one German plane, so the details should be pretty accurate.

Then it sounds like a book I'd love. I've this weakness for good war stories (and none I've read are anywhere near the quality of patrick o'brian's aubrey-maturin novels, though the biggles books were, and are, addictive)

Did someone read this - lou cameron's "iron men with wooden wings"