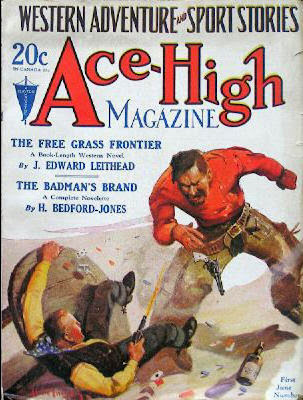 To finish off the year, here's another Western pulp I've read, from the original incarnation of ACE-HIGH when it was published by Clayton. Later, after a gap in being publishing, the title was sold to Popular Publications, where the title was changed to ACE-HIGH WESTERN and it continued under that name for a number of years.
The lead novel is "The Free Grass Frontier" by J. Edward Leithead. It's a typical yarn about big cattle barons in trying to force out the smaller ranchers. Leithead produced smooth, consistently readable prose without an overabundance of Western dialect, and that's what makes this story a pleasure to read.
"The Badman's Brand", by H. Bedford-Jones, is a novelette about an old-timer in helping a girl from the East look for her missing brother while at the same time dealing with a gang of Mexican killers who are after a noble, mysterious bandit. (And yes, the plot twist really is that obvious.) Just as with the Leithead story, Bedford-Jones' style and pacing saves this story, which has a very effective ending and one final twist that I didn't see coming.
The other stories:
"The Abalone Ring" by Hapsburg Liebe, a short actioner about a trick-shooter in a Wild West show who goes home to solve a murder.
"McGrew Comes Through" by J.R. Johnston, the adventures of a canny old lawman and his not so bright but fast on the draw deputy.
"The Wolf Bites" by Glenn A. Connor, in which a young outlaw on the run for a crime he didn't commit throws in with the law to round up a gang of killers.
"Ladies' Day Dugan" by James W. Egan, a baseball story in the middle of all those Westerns (the magazine's masthead does say "Western Adventure and Sport Stories"). Pretty enjoyable, though the comedy ending falls a little flat. I like baseball stories, though, every once in a while.
"Held up in Halfmoon" by A. Clifford Farrell. I assume this is the same author who later goes by Cliff Farrell. If so, I've read and enjoyed some of his novels. This story is about a deputy tracking down a masked outlaw whose identity is supposed to be a surprise.
"Jammin' the Jamboree" by Clee Woods. The only story I started and didn't finish. I usually don't like comedy Westerns, and this one was no exception. It's about a bulldogging competition.
"Rustling Hay" by Bertrand L. Shurtleff, which has a nice plot about rustlers who steal hay instead of cattle. The protagonists are a pair of wandering cowpokes named Big and Little (that almost made me quit reading).The interesting plot kept me going and the characters turned out to be okay.
There's also part of a serial, "Gun Country" by William Colt MacDonald, that I didn't read. I think I have the complete novel under some other title. The main character's name, Blaze Routledge, sounds familiar.
Plus "The Sluice Box", a mining column, and "The Country Store", a department that includes a swap shop, a missing persons section, and letters from readers. Overall this is a pretty good issue, not as strong as the issues of WESTERN STORY and ADVENTURE from the Twenties I've read, but certainly well worth reading.
Posted by James Reasoner at 7:00 AM

I've always liked ACE-HIGH during the Clayton years and they often used authors that did not write that often for the other pulps, so you got a different slant on westerns. They did use humor, comedy, and slapstick often and some of these stories are funny if you are in the right mood.

One of the best comedy series in ACE-HIGH was written by H.Bedford Jones and starred a crazy sheriff named Pinky Jenkins. He also was a drunk and corrupt but the stories are quite funny and just about the only comedy that I remember from Bedford-Jones. There were around 15 long novelets, all around 40 pages each.

I've heard of the Pinky Jenkins stories but never read any of them. Something else that somebody needs to reprint. HB-J certainly isn't an author you think of as writing comedies, but I'm not surprised to hear that he was good at it.

I've read H. Bedford Jones, but not his Pinky Jenkins stories. Something else I'll have to track down. Have a Happy New Year, James!