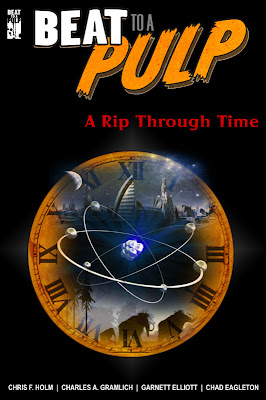 BEAT TO A PULP: A RIP THROUGH TIME is further proof, as if we needed it, that David Cranmer is an inexhaustible source of ideas these days. He came up with the characters and basic plot for this series of short stories, then turned them over to authors Chris F. Holm, Charles Gramlich, Garnett Elliott, and Chad Eagleton to write. The result is this highly entertaining compilation that actually works quite well as a novel.
The story finds Temporal Security agent Simon Rip and the beautiful and brilliant scientist Dr. Serena Ludwig chasing Dr. Robert Berlin through time. Berlin, it seems has stolen his new invention from The Company, the 23rd Century international cartel that Rip, Ludwig, and Berlin all work for. From prehistoric times to Arthurian England to the Havana of Ernest Hemingway in the late 1940s, the chase proceeds in an action-packed adventure very reminiscent of those fondly remembered AGENT OF T.E.R.R.A. novels by "Larry Maddock" that many of us read back in the Sixties.
Ah, but then things begin to take some unexpected turns. All is not as it seems. The stakes are ramped up until A RIP THROUGH TIME becomes a rather mind-boggling cosmic epic that reaches to the very ends of space and time. After all that, it seems odd at first that the book concludes with what appears to be a Victorian-era horror story, but again, things take an unexpected twist and this story cleverly serves as both prequel and coda to the rest of the novel. Then Ron Scheer provides an excellent afterword that looks at time travel in books and movies and speculates on the science involved in traveling through time.
One thing that seems to be missing in a lot of current science fiction is a sense of fun.  A RIP THROUGH TIME has that sense of fun, in spades, and manages to be thought provoking as well. I'm sure there's more to come from the crew that put this together, and I'm looking forward to it. Highly recommended.
Posted by James Reasoner at 6:00 AM

A really nifty idea, wasn't it?

Thanks for the kind words, James! The greatest kick for me was getting to see where everybody else took the story. Unlike Berlin, I never could have predicted where it ended up.

I'm so glad it's finally finished and all together. Cool

Yes, fun is definitely the word. Too much current SF takes itself to seriously and has become less a part of my reading than in former times.

I don't explore as much as I used to, instead sticking with certain authors I know deliver the goods.

You're right, James. It's a great idea and leave it to David Cranmer to come up with it. He's a dynamo and a peach of a guy to work with. No sci-fi writer, I was pleased as anything to be part of the project.

Looking forward to reading it.

To echo Chris, thanks for the kind words. Glad you liked the end--I was worried about it.

And for me, David being involved was absolutely a deciding factor.